Central Corridor challenge The Preserve and Benefit Historic Rondo Committee filed a civil rights complaint with the Federal Transit Administration yesterday. Spokesperson Veronica Burt said the Central Corridor will have an impact comparable to the destruction of the old Rondo community by the construction of I-94 in the 1960s. She told MPR:

“This renewal can essentially renew us right out of our own neighborhood,” said Burt. “Anybody who can stand firm and hold on through the construction — then there’s the wave of the rise in property values on the corridor itself, and in the surrounding neighborhoods.”

According to MPR, Met Council Chair Peter Bell said the project would revive the neighborhoods and expressed concern that the claim would delay the project, and said that project planners have already heeded community wishes, by adding pedestrian crossings and agreeing to develop the infrastructure for three future train stations along the line.

According to a press release from PBHRC, their concerns were dismissed by Bell in a meeting:

According to Chairman Bell, concerns raised would only be discussed if PBHRC first agreed that the LRT could proceed “on time and on budget.” Chairman Bell also remarked that linking the disruption caused by I-94 was akin to former girlfriends who would blame him for the mistakes of their previous boyfriends. 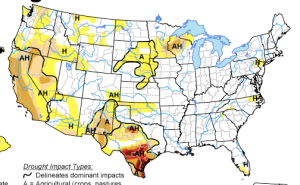 Drought threatens Is your lettuce looking puny? Are your flowers drooping? And as you drive through the Twin Cities, do you see crispy brown lawns? Outside the metro, the signs may be less familiar, but newly-planted fields lack subsoil moisture. The National Drought Mitigation Center rates nearly all the southern half of Minnesota as abnormally dry or worse, according to AP:

Forty-six percent of Minnesota is now rated abnormally dry or worse, up from 32 percent last week, while 11 percent is in drought and 2 percent is in severe drought.

Strib workers strike back As the Strib management tries to spin the pension cuts and give-backs it is demanding from drivers, reports David Brauer in MinnPost, Strib writers are backing the drivers and debunking the management statements. Brauer reprints the entire writers’ memorandum. A few notable paragraphs:

In fact, the company is demanding deeper, more permanent sacrifices from the Teamsters, when it comes to pensions, than it is seeking from any other labor group. The company memorandum is filled with distortion and inaccuracies in an effort to build up animosity toward our brother and sister trade unionists.

The truth is that the company has pushed the Teamsters’ back to the wall. Although the pension dispute is unresolved at this writing, the drivers’ union has already tentatively agreed to huge concessions, that includes, at minimum, a 26 percent reduction in wages. (That’s a bigger pay cut, for example, than many in the newsroom have taken, and newsroom workers have taken some big hits.)

Over the years, the drivers have deferred large wage increases so more of their base pay can go to their pension. Besides the drivers’ hourly pay, $5 per hour per driver is put into their pension (a combination of deferred pay from the driver and a contribution from the company.) Under the company plan, drivers will lose that $5 along with the 26 per cent wage cut, bringing the drivers’ total pay cut to a staggering 37 percent.

The memo goes on to take apart management claims, paragraph by paragraph.

Wal-Mart labor case Dakota County District Judge Robert King Jr. approved a settlement of wages-and-hours claims against Wal-Mart that could total up to $54.25 million for 100,000 present and former Wal-Mart workers, according to the PiPress.

Definitely time for school to be done As June wears on, it’s clear that students should be out of school. Some 70 Rochester students were suspended after riding bikes, scooters and skateboards through the halls May 29 as a prank, reports AP. And in Portage, Wisconsin, five students were arrested and removed from the school in handcuffs as other students gave them a standing ovation. School authorities called the cops to stop a food fight that involved tacos and yogurt, according to AP.

Pakistan A bomb attack in the Northwestern district of Upper Dir killed 30 people at prayer in a mosque on Friday, reports BBC.

Somalia Fighting in central Somalia, near the town of Webho, claimed 10 lives as Islamist extremists clashed with Sufi fighters. Angered by desecration of Sufi graves by the al-Shabab group, the Sufi Ahlu Sunna Waljamea sect pledged support for the government of President Sheik Sharif Sheik Ahmed, according to BBC.

Sri Lanka Now that the war is over and the Tamil Tigers defeated or killed, the government is going after doctors who served in the conflict zones. BBC reports that the doctors were the only source of information on the war, since journalists were barred from the war zones.

The government says not a single civilian died as a result of its final offensive, despite international allegations to the contrary.

More than 250,000 civilians are still in refugee camps inside Sri Lanka. Sri Lanka’s foreign secretary, Palitha Kohona said that everyone in the camps must be carefully screened because it is “‘quite likely’ that even many elderly people were ‘with the LTTE, at least mentally.'”