Factory farms: Too big to regulate? 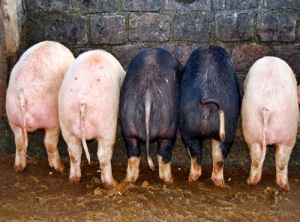 The feds used to require CAFOs to get a permit under the National Discharge Pollution Elimination System (NDPES). The oversized feedlot operations had to describe their plans – for manure management, for air emissions and odor management, for emergencies, for disposing of dead animals, for regular operations.  The Minnesota Pollution Control Agency administers the NPDES application and permit program.

In 2008, the Bush administration changed the rules, said no permit was needed, so long as the big farms don’t intend to discharge animal waste into the water system. With a thousand animal units all eating and pooping and peeing in the strictly confined area of a factory farm, intention seems like a strange standard to use. If you live near one of these CAFOs, careful plans for manure management and for air emissions and odor management mean more than good intentions.

I talked to Jim Falk, a fifth generation family farmer in Swift County, at the Land Stewardship Family Farm Breakfast on March 2. Falk said he agrees with the Land Stewardship Project position on NPDES. “Permits provide some parameters that make certain people are playing by the rules and that they are good actors,” Falk said, adding that changing the rules would make it harder to enforce compliance with management practices.

Falk cited the ValAdCo hog operation near Renville and the notorious Excel Dairy in Marshall County as examples showing that larger operators have the potential for larger problems. The Minnesota Health Department found serious air pollution and public health concerns at ValAdCo in 2002 and at Excel Dairy in 2008.

Falk talked about the need to protect Minnesota’s water. “Until we fully understand how we are going to address the problems with our water,” he said, “it would be shortsighted to loosen our standards.

The federal action to lower standards for Concentrated Animal Feeding Operations makes it possible for Minnesota to lower its standards as well. It’s possible – but not necessary and not smart.

We don’t need lower standards. Ask the people who lived near ValAdCo and, as reported by MPR, “said the fumes from the lagoons were a health threat and made the area practically unlivable.” Ask the people who lived near Excel Dairy, and were told by the Minnesota Department of Health to evacuate their homes when MDH concluded that “Excel Dairy is a public health hazard.”

If you think Minnesota should keep on regulating the CAFOs, check out the Land Stewardship Project’s call to action – and call your legislator.

One response to “Factory farms: Too big to regulate?”