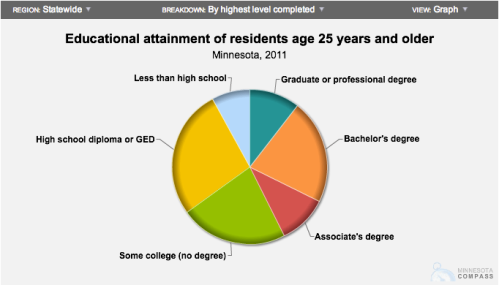 I listened to The Daily Circuit on MPR Friday, with local “experts” debating what we should do about education (starting at about 37:16.) Peter Bell criticized Minnesota schools and repeatedly said, “The dropout rate in some districts is 50 percent.” He is absolutely, 100 percent dead wrong on the dropout rates, but nobody challenged him on the facts. Not the host. Not the other guests.

Why not? Does Minnesota Nice mean that we don’t call out people who misstate the facts? Why isn’t truth an issue for pundits and politicians alike?

Do we need to improve our schools? Of course, we do — that’s not the issue. The issue is using phony numbers to downgrade and disrespect the hard work that students and teachers are already doing.

Truth is not some unachievable ideal, even when it comes to complex issues. Truth is a minimum requirement for civic discourse and decision-making. (Neither Democrats nor Republicans have a monopoly on getting the facts right. I have called out people I agree with for getting the facts wrong in the past, and I’ll do so again.)

I am fed up with people who deliberately (or carelessly) get the facts wrong about important issues, or just talk off the top of their heads without even trying to find facts. Getting the facts right doesn’t mean agreeing about policies or candidates, but getting the facts right is the essential basis for any kind of reasoned discussion or debate.

4 responses to “Minnesota malarkey: On dropout rates and facts”