63 million people and a crisis of solidarity 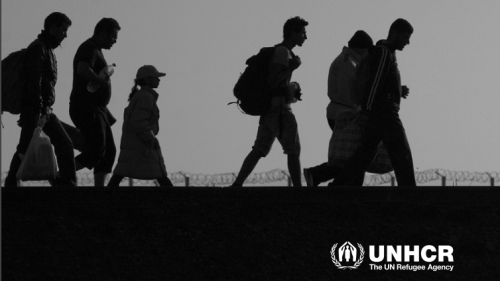 A new UN refugee agency report shows 65.3 million people forcibly displaced from their homes around the world. Of that number, 21.3 million are refugees and 3.2 million are aseeking asylum. Another 40.8 million internally displaced persons live inside their home coujntries, but have been forced out of their homes.

Numbers can only hint at human suffering.

“Unaccompanied children are one of the most vulnerable groups reaching Europe’s shores. Estimates suggest that almost 90,000 unaccompanied children made the journey into the European Union last year, a majority coming from war-torn countries such as Syria, Afghanistan and Iraq.”

Desperate refugees continue trying to cross the seas to safety in Europe. And they continue to drown in the attempt.

“The Libyan navy says the bodies of at least 100 migrants and refugees have been recovered off the North African country’s coast after the vessel in which they were traveling to Europe capsized. It’s the second vessel carrying migrants that capsized Friday: The first, off the Greek island of Crete, resulted in at least four deaths and the rescue of about 300 people.”

Others never make it to the shore:

Niger says the bodies of 34 migrants, including 20 children, have been found in the Sahara Desert near the border with Algeria. … Interior Minister Bazoum Mohammed said it appeared they had died of thirst after being abandoned by their smuggler.

The Catholic Immigration Network has stories of Central Americans seeking asylum in the United States:

• Leyla fled Honduras after gang members shot her brother, assaulted her father with a machete, and attempted to kill her cousin.

• Isabel fled Honduras after gangs kidnapped and tortured her for 15 days after her brother ran away to avoid recruitment into the gang;

This report details lack of due process for Central Americans seeking safety here:

Many of the families seen by the CARA Project were denied due process because they received:

• No notice of their court hearings—in one case, the address in ICE’s file did not even have a street name and was obviously inaccurate;

• No legal counsel or bad legal advice—in fact, in 12 out of the 21 cases, the family had no legal counsel at all before they received a removal order; and/or

• No information at the border about when to go to court or how to apply for asylum.

The number of displaced persons is larger than ever before. The UNHCR report notes:

“The global population of forcibly displaced people today is larger than the entire population of the United Kingdom.5 If they were a country, the forcibly displaced would be the 21st largest in the world. Some nationalities were particularly affected by forced displacement. With 4.9 million refugees, 6.6 million IDPs, and nearly 250,000 asylum-seekers, an estimated 11.7 million Syrians were displaced by end-2015, seeking protection within Syria or abroad. Other large displaced populations – those with over 2 million people displaced, either internally or as refugees or asylum-seekers – at the end of 2015 were Afghans, Colombians, Congolese, Iraqis, Nigerians, Somalis, Sudanese, South Sudanese, and Yemenis.”

The refugee crisis is a global crisis. That means it is our crisis, too — not just the crisis of Syria or Afghanistan or Europe.

“We are facing the biggest refugee and displacement crisis of our time. Above all, this is not just a crisis of numbers; it is also a crisis of solidarity.” Ban Ki Moon, United Nations Secretary General