Lies of the week from Bowling Green to Yemen 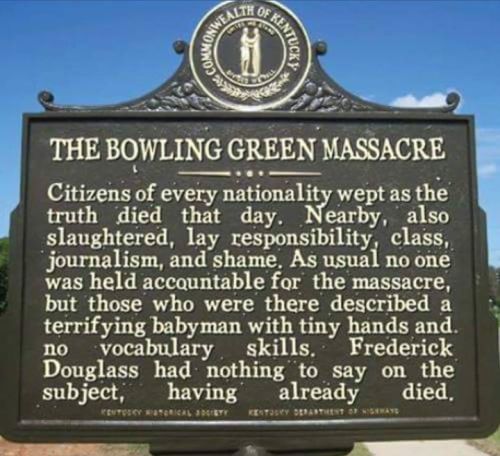 “Most people don’t know that because it didn’t get covered,” Conway said.

The Bowling Green massacre didn’t get covered because it didn’t happen. There has never been a terrorist attack in Bowling Green, Ky., carried out by Iraqi refugees or anyone else.

Many people in Bowling Green celebrated:

“For Bowling Green radio personality Jelisa Chatman, Conway’s remarks were like a gift from heaven as an on-the-air subject.

“You wake up in the morning and you think, ‘What am I going to talk about today?'” she said. “And God is like, ‘Here you go. You need something to talk about, how about this?”

“At Home Cafe & Marketplace, the most popular pizza Friday was “the Bowling Green Massacre” pie. The specialty pizza with blackened chicken, mac’ and cheese and jalapenos was on pace to set a one-day sales record at the Bowling Green restaurant, said owner Josh Poling.

“The minute I heard it last night, I was like, ‘Oh gosh, that’s too good of an opportunity to pass up,” he said.

“All proceeds from the specialty pizza’s sales will go to the Southern Poverty Law Center, he said.”

The Pentagon claimed that the Trump administration’s first military adventure was a great success. They posted an Al Qaeda video supposedly recovered in the raid in Yemen, calling it “one example of the volumes of sensitive al-Qa’eda terror-planning information recovered during the operation.”

Only one problem: the video was actually captured in 2007.

The raid in Yemen resulted in one Navy SEAL death, the destruction of a $75 million U.S. plane after it was disabled at the scene of the raid, and the killing of more than 30 people, including ten civilian women and children. According to The Hill:

“Media reports about the raid described a chaotic scene of U.S. soldiers moving on a heavily guarded compound where the al Qaeda fighters may have been tipped off to their plans.
“Reuters cited U.S. military officials in a report claiming that the operation was approved without sufficient intelligence, ground support or adequate backup operations.”

The New York Times wrote, ” As it turned out, almost everything that could go wrong did.”

And then there’s the final lie, a kind of classic meme of “They attacked our ships, let’s go to war” that worked to stir up public sentiment for the Spanish-American War in 1898 and for escalation of the war in Vietnam in 1964.

On February 2, Press Secretary Sean Spicer told a press briefing that Iran had attacked a U.S. naval vessel, and that was part of the reason the administration was putting Iran “on notice.” What actually happened, as reported in The Intercept and elsewhere, was “an attack on a Saudi naval vessel by Houthi rebels in Yemen (the Houthis are tenuously aligned with Iran’s government but are distinct from it).”

The reporters in the room knew Spicer was wrong:

“Major Garrett of CBS News quietly corrected him, saying ‘a Saudi vessel,’ and Spicer then responded almost inaudibly: ‘Sorry, thank you, yes a Saudi vessel. Yes, that’s right.’ He did not in any way address his false claim that it was an Iranian attack, however.”

Isn’t it time to stop giving these liars air time? Responsible media outlets could simply refuse to give any Trump administration officials live air time: not for press conferences, not for announcements, not for Sunday morning “news” shows. Instead, they could listen to the statements, pre-record the interviews, and then fact-check before airing anything. Given the record of lies, it seems to me that would be responsible journalism.