Four Things to Do If Trump Won’t Leave

We clearly need to prepare. In the service of sanity, I suggest some survival strategies: 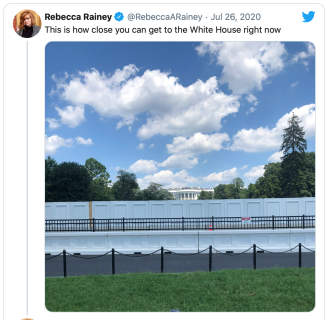 Build that wall—around the White House. Not hard to do, since the recently-fortified wall around the White House is probably more gesund than most miles on the Mexican border. All we would need to add is a virtual wall blocking access to Twitter, and we could all try to forget the last four years.

The next president could choose another official residence. I hear there may be a bankruptcy sale on a big hotel just a few blocks down Pennsylvania Avenue.

Find another country: Forbes just published a list of twelve countries where you can buy citizenship and a second passport: St. Kitts & Nevis, St. Lucia, Antigua and Barbuda, Dominica, Grenada, Portugal, Malta, Cyprus, Austria, New Zealand, Turkey, and Vanuatu. A second passport makes travel possible again, at a time when Americans are banned from Europe because of COVID-19.

The Caribbean nations and Vanuatu offer the best bargains. According to the Forbes article:

“The archipelago of Vanuatu—about 1,000 miles east of Australia—has a Development Support Program that requires a non-refundable donation to the islands of $180,000 for a family of four. In return, you’ll get a passport that will secure visa-free travel to 116 countries, plus the opportunity to call this island paradise your new home.”

St. Lucia is offering a sale: just $300,000 for a family of four. Austria, on the other hand, requires a minimum investment of $3.5 million.

Pray the devil back to hell. It worked in Liberia, at least according to a documentary that won a prize at the Tribeca Film Festival.

Levitate the White House. We old hippies remember 1967 when Abbie Hoffman “asked for a permit to levitate the Pentagon 300 feet off the ground, explaining that by chanting ancient Aramaic exorcism rites while standing in a circle around the building, they could get it to rise into the air, turn orange and vibrate until all evil emissions had fled.  The war would end forthwith.” Abbie even got a legal permit to try, though it specified a maximum levitation height of 10 feet.

Didn’t work then, but with the White House already turning orange, maybe we would have a lighter lift in November.