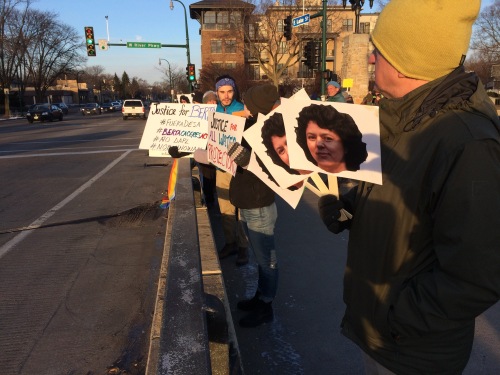 I missed getting my forehead smudged with ashes on Ash Wednesday, on the slushy, icy road out of the Twin Cities by sunrise. On Thursday, I walked out of the house into a cold sunrise, heading for the Lake Street Bridge and a different kind of smudging in another holy ritual.

The traditional Catholic Ash Wednesday marks the beginning of Lent with a reminder that we are dust, and to dust we will return. The ashes are sacred, coming from last year’s palms, the palms distributed in churches on Palm Sunday, remembering Jesus’s triumphant entry into Jerusalem. We meditate on life and death, his and ours.

On Thursday, I joined about a hundred people on the Lake Street Bridge. We prayed. We remembered the life and death of Berta Cáceres, a Honduran defender of indigenous rights and warrior for environmental justice. Berta was assassinated one year ago, gunned down because of her work for justice. We connected her struggle in Honduras and the struggles for justice here: to protect the water, to protect immigrant brothers and sisters, to connect with one another across lines of race and age and gender and ethnicity and ability.

We walked across the bridge that connects Minneapolis and St. Paul, over the Mississippi and back again. I remembered my sister Kathy, as I do every time I walk a bridge across the Mississippi. Kathy – K/T – was pulled from those icy waters some 43 years ago. Death does not end connections.

As we walked, we chanted: Berta vive, la lucha sigue – Berta lives, the struggle continues. What do we want? Justice. When do we want it? Now.

No justice yet for Berta. Some arrests have been made, but no justice, no connection back to the intellectual authors of her assassination. No justice yet – but we remember, we pledge to continue the struggle for justice.

Back on the Minneapolis side, some people spoke. Minnesota State Senator Patricia Torres Ray reminded us that right now, in the United States, water is endangered. Right now, in St. Paul, the legislature considers cutting funding for the Pollution Control Agency and rolling back regulations that protect our water. Right now, in Washington, the president and Congress are rolling back regulations that protect water and slashing funding for the Environmental Protection Agency, and proposing to cut funding for cleaning up the waters of the Chesapeake Bay and eliminate funding for cleaning up superfund sites. Right now, the Dakota Access Pipeline is crossing beneath the Missouri River. Right now, we have work to do, to resist, to protect the waters.

Ojibwe elder Sharon Day offered a prayer, for the waters, for water protectors, for us, for Berta. In 2013, she walked the length of the Mississippi, carrying a pail of water from its headwaters to the Gulf of Mexico to raise awareness of the dangers to and pollution of our Mississippi. She told Minnesota Women’s Press:

“We want the walk to be a prayer…. Every step we take we will be praying for and thinking of the water…. The water has given us life and now we will support the water.”

Thorne and Wakinyan LaPointe, Dakota brothers, offered prayers while someone carried burning sage to smudge the gathered people. Smudging blesses through smoke that rises, rather than through ashes on foreheads.

“There is no separation between Creator and creation,” Thorne LaPointe told us. “My spirituality is my reality.”

(After the gathering, as I warmed up and thawed my icy feet in Dunn Brothers before heading home, he told me the words were not his alone, but came from AIM elder Philip Deer, and perhaps from others before him.)

My spirituality joins prayer and protest. Justice for people and land and water are not optional, but essential to my faith and spirituality. Pope Francis wrote in his 2015 encyclical:

“I will point to the intimate relationship between the poor and the fragility of the planet, the conviction that everything in the world is connected, the critique of new paradigms and forms of power derived from technology, the call to seek other ways of understanding the economy and progress, the value proper to each creature, the human meaning of ecology, the need for forthright and honest debate, the serious responsibility of international and local policy, the throwaway culture and the proposal of a new lifestyle.

“In the present condition of global society, where injustices abound and growing numbers of people are deprived of basic human rights and considered expendable, the principle of the common good immediately becomes, logically and inevitably, a summons to solidarity and a preferential option for the poorest of our brothers and sisters.”

We walked prayer this morning, as surely as Catholics around the world wore prayer on their foreheads yesterday.

What you can do – Go, Contribute, Learn

“Seven members of the LaPointe tiwahe (family) will be traveling to the United Nations Permanent Forum on Indigenous Issues meeting March 24 – April 5 to let people know about the Summit, network, and invite participation. The LaPointe family is hosting an informal gathering and fundraiser to help support its trip to the United Nations.

Contribute: A Tiwahe return journey to the UN

And from my blog: