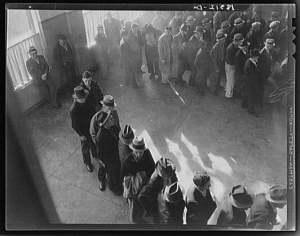 Long-term unemployment bites And it is about to bite harder for thousands of Minnesotans. The Star Tribune reports that time and unemployment compensation benefits are running out for about a thousand Minnesotans every week, and the jobs are not out there:

State figures show that for every job vacancy, there are 7.7 people looking for work. “We had one position open for a receptionist in late spring and we got 500 applications,” said Jane Samargia, director of the nonprofit job counseling service HIRED. “It jammed our computer so badly, we had to shut it down.”

A quarter of the members of the 1,075 members of Plumbers Local 34 in St. Paul are out of work. Stan Theis, the local’s business manager, said he has seen “dozens and dozens” of members lose their homes to foreclosure or file bankruptcy because of layoffs and exhausted unemployment benefits.

Business Week’s chief economist Michael Mandel notes that some sectors of the workforce are particularly hard-hit by the recession, while others have actually increased employment over the past two years:

The big occupational winners: Healthcare; protective services; personal care and service; community and social services; and business and financial operations. All of these occupations posted gains over the past two years.

The big occupational losers:Construction and extraction, production, transportation and material moving, installation, maintenance, and repair, and office and administrative support. All of these posted big employment losses over the past two years.

Healthcare jobs increased by 10 percent, with no other sector showing more than a 4.2 percent increase. The sectors that lost jobs, lost big: 22.1 percent in construction and extraction, 18.3 percent in production, 9.4 percent in transportation and material moving, and so on. For the full article, complete with charts showing BLS stats, go to Mandel’s blog.

Hamburgers hazardous to your health In the wake of a truly horrifying New York Times exposé, Ag Secretary Tom Vilsack yesterday called for legislation to permit mandatory recalls of tainted food, according to MPR. Current law provides for only voluntary food recalls. Vilsack said that 5,000 people in the United States die from food-borne illnesses every eyar, and 75 million are sickened.

The New York Times report started with a 22-year-old Minnesota woman who was poisoned by ground beef produced by Minnesota’s Cargill company. Stephanie Smith is now paralyzed from the waist down, after an illness that began with bloody diarrhea and convulsions, and progressed through a nine-week medically-induced coma that saved her life. The illness began with a burger grilled by her mother for a Sunday dinner.

[A] single portion of hamburger meat is often an amalgam of various grades of meat from different parts of cows and even from different slaughterhouses. These cuts of meat are particularly vulnerable to E. coli contamination, food experts and officials say. Despite this, there is no federal requirement for grinders to test their ingredients for the pathogen.
The frozen hamburgers that the Smiths ate, which were made by the food giant Cargill, were labeled “American Chef’s Selection Angus Beef Patties.” Yet confidential grinding logs and other Cargill records show that the hamburgers were made from a mix of slaughterhouse trimmings and a mash-like product derived from scraps that were ground together at a plant in Wisconsin. The ingredients came from slaughterhouses in Nebraska, Texas and Uruguay, and from a South Dakota company that processes fatty trimmings and treats them with ammonia to kill bacteria.

Despite Cargill’s refusal to answer any questions, the New York Times documented dangerous practices throughout the industry, fueled by a drive to maximize profit and by agreements between suppliers and manufacturers not to test for pathogens. (Costco, for example, says that, because they test for E colli, Tyson will not sell to them.) Department of Agriculture inspections are too little and too late, with inspectors hobbled by low budgets and lack of political will to enforce meaningful penalties against industry giants like Cargill.

From phishing to blogging – online security and transparency Yesterday, I got another phishing email, this one purporting to come from Wells Fargo, warning me of a possible security breach with my account, and asking me to contact the bank with my account information and password. My first clue that this was phishing and not a genuine contact from my bank was — that I do not have a Wells Fargo account. But what clues would tip off the millions of people who do have Wells Fargo accounts know that the email, coming from “onlinebanking@alerts.wellsfargo.com” and bearing the Wells Fargo logo?

First, I don’t know of any banks that would contact a customer in this way. My credit union and credit card companies periodically remind me to ignore such emails, as they are all phishing scams. (Phishing involves using fake websites to lure people into revealing data such as bank account details or login names or other personal information.)

Second, anyone with a computer can create phony but official-sounding email addresses and can copy-paste company or government logos.

Gmail and Hotmail and AOL and Yahoo users have all been recent targets of phishing scams, according to BBC, which says its reporters have seen lists of more than 30,000 names and passwords posted online. Google told BBC that it “recently became aware of an industry-wide phishing scheme through which hackers gained user credentials for web-based mail accounts including Gmail accounts.” Microsoft called phishing “an industry-wide problem.” It’s a security breach not at the level of service providers, but at the level of individuals who respond to the scams by providing their information, so there is not much the providers can do to prevent it.

Blogger payola is the target of a new FTC rule. The rule, effective December 1, says that bloggers who receive free products in return for mentioning the product in their blogs must fully disclose this fact. According to PC World:

Bottom Line: If you receive gifts, money or any other type of compensation from a product manufacturer or service provider you have to disclose it.

But the rule gets more interesting, according to PC World, when you consider its implications for Twitter and other social networking. If you work for Apple and tweet about an awesome new app, you’d better disclose your employment relationship. Ditto for comment board or forum posts dissing a competitor’s product. While the FTC says it is more interested in keeping corporations in line than in going after individual bloggers, it’s always smart to stay transparent about who’s paying — or comping — you for what you write, tweet, Facebook or comment. And after December 1, it’s not only smart: it will be the law.

Ostermeier notes that Pawlenty “continues to draw criticism statewide for his political travel that has taken him out of state in recent months, such as trips to South Dakota, Arkansas, Ohio, and Florida.” That may be part of T-Paw’s popularity problem, but endorsements from the likes of Karl Rove and flip-flops on invoking the Tenth Amendment and states’ rights probably don’t endear him to many Minnesotans either.