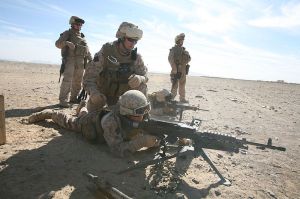 Secret jail. An army of private contractors. Secret ops by the company formerly known as Blackwater. U.S. funds diverted to the Taliban. Lack of popular support for the war. Corrupt and unpopular government. Sounds  like a recipe for success — and reasons to pour in billions of dollars and risk the lives of tens of thousands of additional U.S. troops, right?

As President Obama puts the finishing touches on the speech he will deliver tomorrow night, doubts and opposition to U.S. war in Afghanistan continue to mount. The New York Times predicts that the president will announce an increase in U.S. troops “in the neighborhood” of 30,000, and some kind of exit strategy.

Senators of both parties laid out on Sunday a range of reservations. They cited the questionable reliability of the Afghan government and security forces, the steep costs of a larger involvement, and the advisability of any exit strategy

Arizona Republican Senator John Kyl told Fox News Sunday that the president should NOT discuss an exit strategy, because that would signal that the U.S. is “not there to stay until the mission is accomplished.”

Last week, Minneapolis Congressmember Keith Ellison said that more U.S. troops should be sent until Afghan President Hamid Karzai cleans up corruption and “makes himself into a president that the United States can support.” MinnPost reported on the position Ellison took after returning from a factfinding mission to Afghanistan and Pakistan:

And then, blowing away one of the few justifications left for U.S. presence in Afghanistan, Malali Joya writes in the San Jose Mercury News that we are not helping them and should get out:

As an Afghan woman who was elected to Parliament, I am in the United States to ask President Barack Obama to immediately end the occupation of my country.

Eight years ago, women’s rights were used as one of the excuses to start this war. But today, Afghanistan is still facing a women’s rights catastrophe. Life for most Afghan women resembles a type of hell that is never reflected in the Western mainstream media.

One of the original justifications for the war in 2001 that seemed to resonate most with liberal Americans was the liberation of Afghan women from a misogynist regime. This is now being resurrected as the following: If the U.S. forces withdraw, any gains made by Afghan women will be reversed and they’ll be at the mercy of fundamentalist forces. …

What this logic misses is that the United States chose right from the start to sell out Afghan women to its misogynist fundamentalist allies on the ground. The U.S. armed the Mujahadeen leaders in the 1980s against the Soviet occupation, opening the door to successive fundamentalist governments including the Taliban. In 2001, the United States then armed the same men, now called the Northern Alliance, to fight the Taliban and then welcomed them into the newly formed government as a reward. The American puppet president Hamid Karzai, in concert with a cabinet and parliament of thugs and criminals, passed one misogynist law after another, appointed one fundamentalist zealot after another to the judiciary, and literally enabled the downfall of Afghan women’s rights over eight long years.