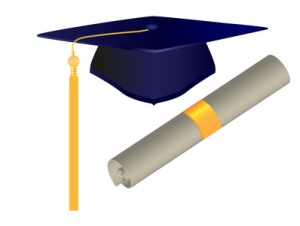 Students who finish their degrees have lower default rates, because they have a better chance of being employed. No surprise there.

Harris Miller, president and CEO of the Career College Association, which represents for-profit colleges, told APthat part of the reason for their high default rate is that they accept so many low-income students. Funny, I’d guess that it has more to do with their high tuition, low graduation rates and consequent inability of indebted ex-students to find jobs that pay enough to make the loan payments.