The dying and the marching go on

As the U.S. death toll in Afghanistan reached the 1,000 mark, about 65 Minnesota anti-war activists demonstrated at Congressmember Betty McCollum’s office May 18. The 1,000 mark was passed as a suicide bomber attacked a U.S. convoy in the heart of Kabul at 8 a.m. on Tuesday. The New York Times reported:

The attack killed 18 people, including 5 American soldiers and an officer from Canada, and wounded at least 47 civilians. … The blast sent a fireball billowing into the air, set cars aflame and blew bodies apart. Limbs and entrails flew hundreds of feet, littering yards and walls and streets. … It was the worst attack in Kabul in weeks. The insurgency is a largely rural phenomenon in a largely rural country, and on most days the capital is calm.

Insurgents also attacked Bagram air base, 30 miles north of Kabul, on Wednesday morning. According to BBC, NATO said all seven attackers were killed, while Afghan police put the number at five.  BBC said the attacks may be part of the Taliban’s spring offensive, code-named Operation Conquest.

Back in St. Paul, Marie Braun of WAMM says six people, ages 20-something to 80, were arrested when they refused to leave McCollum’s office. Their message: Don’t vote for $38 billion more for the war. Braun said that the demonstration at McCollum’s office was organized by WAMM and the Merriam Park Neighbors for Peace. WAMM had also organized anti-war actions in April at Senator Al Franken’s office (five arrests) and Senator Amy Klobuchar’s office (nine arrests). Braun said that both senators and McCollum plan to vote for the supplemental appropriation for the war.

In Pakistan, 12 people were killed in the northwestern town of Dera Ismail Khan on May 18, including the town’s deputy police superintendent, who was killed along with his guard and driver. (BBC)

The wars in Afghanistan and Pakistan are not the same war, but they share one similarity: both are going badly. In Afghanistan, a much-touted offensive that began a few months ago in Marja has fizzled, with the government remaining both ineffective and corrupt and commanding the allegiance of only a quarter of the population in the districts targeted by the U.S. offensive.

For a clear and cogent analysis of what continues to go horribly wrong in the AfPak wars, read Juan Cole’s May 18 post:

The attack in the capital follows a number of operations in the south and east of the country by guerrillas, including the assassination of a prominent Sunni Pashtun cleric in Kunar Province who had urged reconciliation with the Karzai government and the laying down of arms, as well as a motorcycle-bombing at a prison in the southern city of Qandahar, which killed 3.

Late last week a nighttime US raid in the eastern Nangarhar province that locals maintained had gone awry and killed innocents set off province-wide demonstrations demanding that the Yankees go home. This is the second time coordinated civilian protests were mounted in Nangarhar against the US military presence in recent weeks. Similar rallies were held in late April when the US killed the relative of a female member of parliament from the province.

and this May 16 analysis from Tom Englehardt:

By just about every recent account, including new reports from the independent Government Accountability Office and the Pentagon, the U.S. mission in Afghanistan is going dreadfully, even as the Taliban insurgency gains potency and expands.  This spring, preparing for his first relatively minor U.S. offensive in Marja, a Taliban-controlled area of Helmand Province, General McChrystal confidently announced that, after the insurgents were dislodged, an Afghan “government in a box” would be rolled out. From a governing point of view, however, the offensive seems to have been a fiasco.  The Taliban is now reportedly re-infiltrating the area, while the governmental apparatus in that nation-building “box” has proven next to nonexistent, corrupt, and thoroughly incompetent.

As the official war in Afghanistan flounders and as U.S. drones continue to pound targets and kill civilians in Pakistan, the weekly anti-war vigil continues on the Lake Street Bridge between Minneapolis and St. Paul. 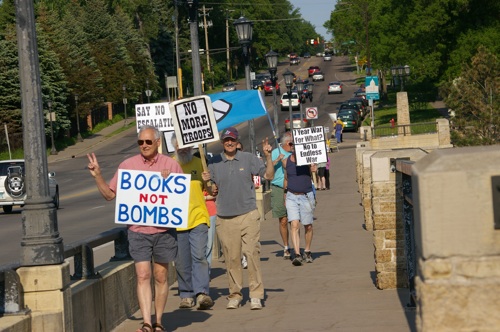 On Wednesday afternoon, a few dozen people show up at the vigil, which has been going on since 1999. John Braun recalled that the vigil began “during the war in Yugoslavia,” and continued as a protest against the then-sanctions aimed at bringing Iraq to its knees. Now the signs call for an end to the wars in Afghanistan and Iraq.

One response to “The dying and the marching go on”