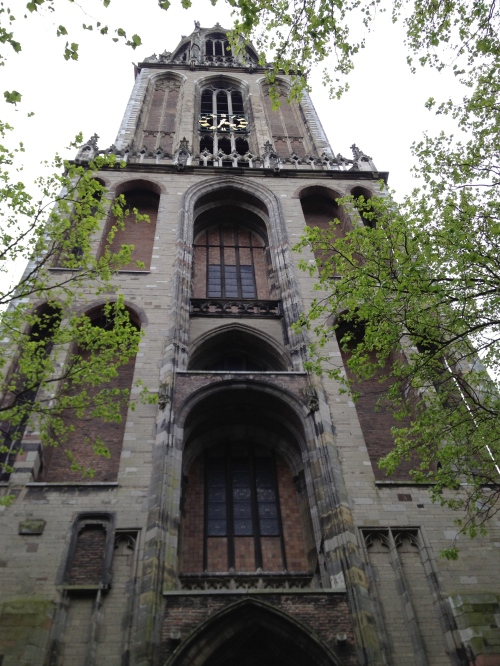 Walking around the center of Utrecht, near the Dom Tower and the Oudegracht (Old Canal), one sees markers on the streets and plaques on some buildings telling about the location of the Roman Wall. At night, the iron street markers, which have an opening, show as bright lines of light across the street, showing the boundaries of the old wall, which now lie buried beneath the stone and brick streets.

The Romans built a line of fortresses around 50 CE, and one of the fortresses was in Utrecht. The original wood fortress was replaced by stone walls about 200 CE, trying to hold off raids from Germanic tribes. Around 275, the Romans abandoned Utrecht. The city was next home to an important bishopric, beginning in the latter half of the seventh century.

The Domtoren is the highest point in Utrecht, towering 368 feet above the city, with its giant bells and melodic carillons inescapably marking time throughout the day and night. You might think that the bells need not ring the half and quarter hour during the wee hours of the morning, but you’d be wrong. The biggest bell weighs nine tons.

The Domtoren was built between 1321 and 1382, along with the Dom church. The tower was connected to the rest of the church by a long nave. The nave collapsed in 1674, leaving the church and the tower separated by a pile of rubble. That space is now the Domplein or Dom Square.

Climbing the Domtoren is only possible as part of a tour, so Macy and I joined about 20 people in trekking up more than 400 steps (with several stops along the way.) The hour-long tour begins in a room at the tower’s base, an outer room that is not part of the actual tower, according to the guide. When the stairs change from wooden to stone, we are inside the actual tower.

The first stop, after about 50 stairs, is the former bishop’s chapel, where the bishop could both take refuge and repel intruders, as needed. The second level — up about another 50 steps — was once the home of a watchman or guard, if I recall correctly. Then the climbing gets serious, reaching the level of the bell tower. One of the bells weighs nine tons, and the total weight of all the bells is about 16 tons. They still ring day and night, marking the quarter hours for any sleepless souls awake at 3 a.m. Our host at Rosendalen Apartments assured us that local people don’t even notice them.

After the bell tower, the climb is steep and claustrophobic, with only enough room for a single file of climbers. By the top of the climb, there are no rails, only the stone walls on either side of the stone steps, winding in a steep spiral up and up. Slits in the walls allow glimpses of the town far below. Finally, the top level (not quite the top of the tower, but as far as it is possible to climb). The view from the top would be absolutely breath-taking, but by that time I was completely out of breath anyway. You can pace around the stone battlement, touch the snouts of the gargoyles, and take pictures of the city below.

The climb down has only a single stop, as the guide rushes through the last part of the talk.

When Macy first asked about climbing the Dom Toren, I wasn’t sure. That’s a long way up, and seemed a bit ambitious, if not precisely athletic. However … my year at Lifetime Fitness should count for something, and I agreed.  I expected to be exhausted by the climb, but in the end, I was exhilarated to find that I am in better shape than I realized.