Travel Tales #7 — I do not speak the language 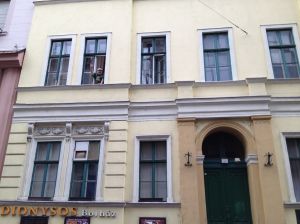 I couldn’t pronounce the address of our apartment — Dessewfy utca 22. I learned, eventually, that there are 47 characters in the Magyar alphabet, which may explain why I can’t pronounce anything. Magyar also has different words for “red,” depending on the temperature of the word. Not the color or shade — but one word would mean the passionate red of blood, while a different red would mean the red of a roof or something “cooler.” And that made me wish even more that I could understand the language. 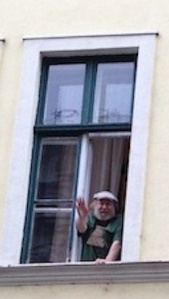 It was strange to be, for the first time, in a whole country where I can’t speak or understand a word of the language. Nicaragua, Costa Rica, Guatemala, Honduras — I made mistakes, but I could make myself understood and understand enough of what people were saying to me. France — a challenge, but the sounds were familiar, I had enough words to get by, there were cognates, and I could read street signs and the names of things in stores, and newspapers. Even in the Netherlands, I could understand some words, and Dutch is close enough to German so that I could guess at a lot. Of course, everyone there seems to speak English, so even Dutch/German is not really necessary to get by.

In Hungary, too, many people spoke English, but I still felt more foreign because I did not have any of their language. But I finally had to communicate in not-English, and managed … I went to the corner store to acquire ibuprofen, but could not find it on the shelf. I asked about it — miming a headache and saying “aspirin” and “ibuprofen,” and they told me “Apothek.” Okay, that’s close enough: Apothek, apothecary, drug store. But where? They took me to the door and pointed me in the right direction and I walked a couple of blocks to find, indeed, an Apothek, with a pharmacist who spoke English and offered me 400 mg or 800 mg tablets or capsules. I decided on the 400 mg tablets, and felt inordinately proud of myself for acquiring them.

We had arranged ahead of time for an apartment, which was quite lovely, on the second floor of an apartment building, with 15 foot ceilings, two large bedrooms, and large windows with wooden shutters on the inside. It’s all a family affair, and Martón Andrassy sent his father, Daniel Andrassy in his silver-colored Skoda Superb taxi to pick us up at the airport and bring us, on a Sunday afternoon, to the apartment where Agnes Rose welcomed us and explained, at much greater length than our troupe of tired travelers really wanted, where and how to find everything in the vicinity. (Stairway in the apartment building, left.)

In the end, Macy and I found even more interesting (to us) places and spaces, just by walking. The art-filled Apacaku restaurant, right around the corner, was a peaceful place for our first-night dinner and a welcoming bar for late-night cocktails for Macy and me. (Ron, with his favorite Apacuka statue, at right.) A café district was a block away in another direction, half a block to a gay bar, a few blocks to the famous opera house and theater district.