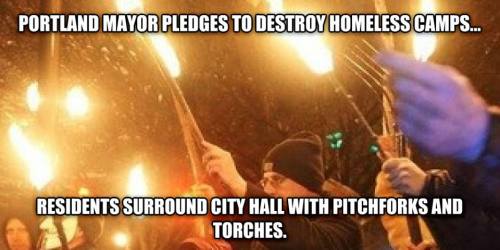 Solutions for homelessness? Well, there’s a legislator with a sledgehammer in Hawaii and protesters waving pitchforks and torches in Portland, but the more effective approach comes from Utah.

Hawaii State Representative Tom Brower wields a sledgehammer, smashing shopping carts used by homeless people. Well — unless he can tell what store they belong to, in which case he dumps the homeless person’s belongings on the ground and takes the cart back to the store. HuffPost said he’s not worried about getting in a dispute with a homeless person:

“When you are walking down the sidewalk with a sledgehammer,” he told the Star-Advertiser,” people get out of your way.”

Brower is a Democrat, so you might think that the Republicans in Utah would be even more harsh. Not so — their idea is giving houses to homeless people. Makes sense, since that cuts homelessness and is cheaper than providing emergency room care. David Weigel describes the program in Slate:

“Eight years ago, under Gov. Jon Huntsman, Utah started an experiment in which chronically homeless people—first 17, then 2,000—were given apartments and full-time caseworkers. The goal: Instead of shrugging and cursing when the homeless showed up half-dead at emergency rooms, they’d try to get them into shelter and, hopefully, independent living.”

Utah’s HousingWorks program, according to its website, is aimed at preventing homelessness and at housing people who have been chronically homeless:

“The State of Utah has adopted the Housing First approach which provides permanent supportive housing to chronically homeless individuals so they can focus on stabilizing their disabling condition in a safe and supportive environment. Here, housing is not contingent on participation in supportive treatment programs or an expectation of abstention from drugs or alcohol, but on the basics of good tenancy. Residents are guaranteed stable housing as long they are good stewards of their personal and shared housing areas and maintain good relations with other tenants, case managers, and property managers.”

Utah explains that their plan is based on studies in other places, such as San Francisco and Denver, showing large savings from providing permanent, supportive housing. The savings were realized through large reductions in emergency room and inpatient costs.

Unfortunately, lots of places haven’t gotten the message. NPR reports on a number of cities where the preferred solution is trying to chase homeless people out of parks or off the streets or, generally, out of sight.

Portland is one of those cities. The Portland Housing Bureau estimates that about 4,000 people sleep on the streets or in shelters on any given night. Al Jazeera and Huffington Post reported that the city has been clearing out homeless camps and rousting homeless people sleeping on the streets. Last week demonstrators took torches and pitchforks to city hall to protest the city policies and “shame the mayor into action.”

“Utah has reduced its rate of chronic homelessness by 78 percent over the past eight years, moving 2000 people off the street and putting the state on track to eradicate homelessness altogether by 2015.”

2 responses to “Sledgehammers, pitchforks and homelessness”