“Tell me your zip code and I’ll tell you how long you are going to live.” Four years ago, at an Annenberg conference in California, that statement came as a shock. Not any more.

The New York Times reported this weekend (March 16) on the disparities between Fairfax County, Virginia and McDowell County, West Virginia.

The correlation is easy: higher incomes mean longer lives. As the income gap widens, so does the life expectancy gap. A multitude of factors contribute to the gap: poor communities have less access to hospitals and health care, fewer grocery stores, high rates of pollution. They have less access to parks, fewer safe places to walk or jog, fewer swimming pools and health clubs. People with lower income have to work more hours. They are subject to a hundred stresses that diminish both quality of life and longevity. As the New York Times puts it:

“Finally, and perhaps most powerfully, researchers say that a life in poverty is a life of stress that accumulates in a person’s very cells. Being poor is hard in a way that can mean worse sleep, more cortisolin the blood, a greater risk of hypertension and, ultimately, a shorter life.”

Longevity-by-zip-code has been documented in the Twin Cities by the Robert Wood Johnson Foundation: 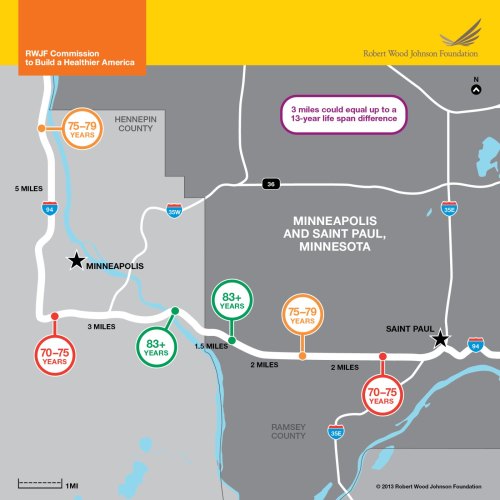 Wilder Research has details in a 2012 report, Health Inequities in the Twin Cities. The summary includes a finding of an eight-year difference in average life expectancy between highest and lowest income areas, poorer health tied to poverty and lower education levels, and life expectancy varying by race.

A February 1 Minnesota Department of Health report, Advancing Health Equity in Minnesota, focused on the racial disparities in health:

“Even where health outcomes have improved overall, as in infant mortality rates, the disparities in these outcomes remain unchanged: American Indian and African American babies are still dying at twice the rate of white babies.”

“These health disparities persist and are neither random nor unpredictable. The groups that experience the greatest disparities in health outcomes also have experienced the greatest inequities in the social and economic conditions that are such strong predictors of health.”

The report distinguished between health disparity and health inequity. A health disparity is a difference in health outcomes for different populations. For example, women have more breast cancer than men.

The MDH report recognizes that health is not isolated from other parts of life, and urges improvement in living conditions, nutrition, transportation, education and income as necessary parts of improving health.

The New York Times article on longevity-by-zip-code appeared in the business section, which seems like exactly the right place. Health is everybody’s business — and policies that reduce disparities and inequities in education, housing, and wealth will also reduce disparities in health and longevity.