Seed dreams in the dead of winter 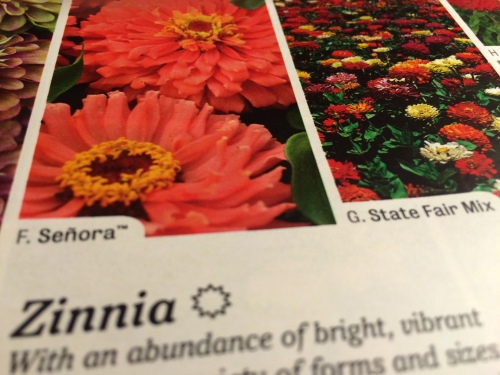 During the coldest week of the year, I’m looking at luscious red tomatoes on the cover of a recently-arrived 2015 seed catalog. Ever since I was a kid, seed catalogs have arrived in the depth of winter, filled with hope, promising that vegetables and fruit and flowers will roll around again. In deepest winter, a farmer’s fancy turns to spring.

I’m not much of a farmer any more. Living next to a freeway where the soil is poisoned by years of leaded gasoline emissions, I plant lots of flowers, with vegetables limited to containers.

The seed catalog offers hybrid this and that, but seed libraries offer self-pollinating seeds and heirloom varieties. Duluth’s public library is one of hundreds of seed libraries around the country. People can borrow seeds from the library and return seeds in the fall. The Duluth public library explains:

“[The] focus of the Seed Lending Library is not to maintain a steady seed stock, but rather to encourage gardening and the consumption of fresh fruits and vegetables. Realize that the returned seeds have been grown by amateurs, and that there is no guarantee of 100% germination or of absolute varietal purity. The seed has been produced in good faith and spirit by friends and neighbors interested in connecting their community to food and seeds.”

Like many others, the Duluth seed library is illegal. The Minnesota Department of Agriculture notified the Duluth library that it is breaking the law by not testing all seeds before distributing them. That law, meant to protect farmers, was passed before seed libraries started. According to an Associated Press report:

The Duluth city council sent a resolution to the Minnesota legislature in December, asking them to change the law.

I remember my dad rolling up corn kernels in wet newspaper, and checking them every few days to count how many had sprouted. He used the best seeds for the next spring’s planting, and may even have sold some to neighbors. Today both uses might be illegal. A few big agribusiness players, such as Monsanto, control most of the market for corn and soybean seeds. These few big companies develop genetically modified (GMO) hybrids, and generally do not allow seed saving or sharing.

Seed libraries offer gardeners a way around that domination. So do traditional seed companies, like Burpee, which says it does not sell GMO seeds and does not treat its seeds with neonicotinoids.

I hope that the Minnesota legislature acts quickly to exempt seed sharing libraries from the law requiring seed testing. That seems like an action that both Democrats and Republicans could agree on. In the meantime, I’ll spend some more of this cold mid-winter looking at the giant double zinnias and the organic basil in the seed catalog and dreaming of warmer days to come.

EPA approves another superchemical for superweeds

2 responses to “Seed dreams in the dead of winter”