More than saints and superheroes 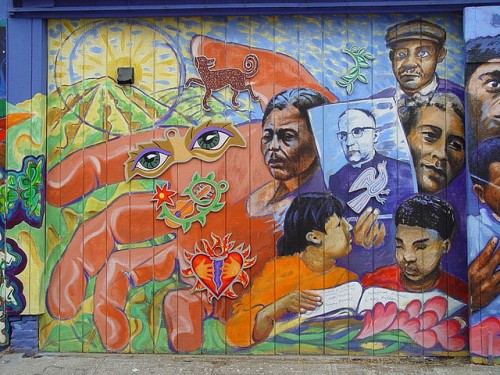 The Catholic Church took one more step toward declaring Archbishop Óscar Romero a saint this week. To millions of people, he is already a saint, a hero and — more importantly — a human inspiration to emulate. Saints and superheroes can seem out of reach to ordinary people. Superman can stop a speeding bullet and leap tall buildings with a single bound. Óscar Romero could not, but he remains now and forever presente, here with us as family and friend and challenge.

Born in El Salvador in 1917, Óscar Arnulfo Romero y Galdámez became a priest. By the 1970s, when he became a bishop, El Salvador was a country torn by civil war. On one side, a succession of vicious, right-wing and military-dominated regimes controlled the government and economic life of the country, with the support of the United States government. On the other, left-wing guerrillas, labor unions, peasant farmer organizations, human rights advocates, teachers, and many church people worked for a different country, where the voices of the people could be heard and the will of the people respected.

During the 1960s, Óscar Romero was a conservative and traditional parish priest, preaching that the poor should accept their misery on earth and look forward to a reward in heaven. But he was also a humble man, ready to learn and be moved and changed by the reality of the people he served. As he saw the suffering of the poor, and then the persecution and assassinations of those who worked for justice and dignity, he changed. In the 1970s, he became a strong voice for the poor, the oppressed, the persecuted.

Romero denounced “the absolutizing of wealth,” saying, “This is the great evil in el Salvador: wealth, private property, as an untouchable absolute.” He denounced the pollution of air and water, “corrupting the nature that we need.” Most of all, he defended human rights against those who would make “power an absolute and an idol … violating the people’s rights.” His sermons were broadcast on the radio, sweeping the country and infuriating the rulers.

He appealed directly to the country’s military, telling them to stop killing their brothers and sisters and to disobey any order to do so. “No soldier is obliged to obey a law contrary to the law of God,” Romero preached, on March 23, 1980: “In the name of God, in the name of our tormented people, I beseech you, I implore you; in the name of God I command you to stop the repression.”

Inevitably, the powerful responded with violence. The very next day, on March 24, 1980, they sent an assassin into the chapel where Romero was celebrating mass, shooting him down at the altar.

Like Martin Luther King, Jr., Archbishop Romero had A few months before his death, Romero said, “If they kill me, I will be resurrected in the hearts of the Salvadoran people.”

Among those people were Herbert Anaya Sanabría and his wife, Mirna Perla de Anaya. Both lawyers, they met while at university and already involved in the country’s struggle. Herbert Anaya went to work for CDHES, a human rights committee, while Mirna became a judge. Before they each grew into a life of struggle for justice, she and Óscar Romero had crossed paths, when he was a parish priest and she a young girl in his parish. Herbert and Mirna were among those in whose hearts Romero continued to live. So, too, was Maria Magdalena Enriquez, secretary of CDHES, who was kidnapped and murdered in October 1980, and the four American religious women who were raped and murdered by security forces in December 1980.

The violence and assassinations continued, year after year. Herbert Anaya became the director of CDHES, after its founder and executive director, Marianella García Villas, was assassinated. When he was jailed in 1986, Mirna gave up her position as judge and took up his work, along with the sole care of their five young children. In jail, Herbert and others compiled hundreds of pages of testimony from fellow political prisoners. After his release, they had but a few months before, in October 1987, Herbert was assassinated outside his home.

Again, Mirna carried on his work, for a while from exile and then returning to El Salvador, where she and her children still work for human rights. Like Herbert Anaya and Óscar Romero, she is a human hero, not a superhero.

Last year, she spoke to El Siglo XXI about the Congreso Internacional de los Derechos Humanos, founded to “translate to new generations this proactive method of knowing, conscientizing, and organizing to become defenders and promoters of universal justice and human rights.” Like Archbishop Óscar Romero, like Herbert Anaya, Mirna Perla de Anaya offers a lifetime of committed work for justice as an example to follow.

Saints and superheroes can seem inaccessible, invincible and perfect and impossibly different from ordinary human beings. Dorothy Day famously said, ““Don’t call me a saint. I don’t want to be dismissed that easily.” She meant that saints are considered superior beings, impossibly holy, and therefore that ordinary people cannot be expected to follow their examples. Neither Óscar Romero nor Dorothy Day would let us off that easily.