Spill, spill, and spill again: Oil across the continent 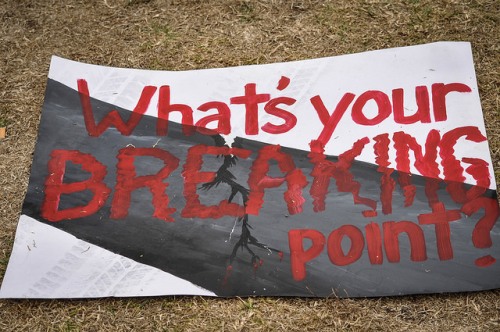 Photo by Steven Storm from protest in Santa Barbara after May oil spill, published under Creative Commons license

A new, state-of-the-art double-layer pipeline failed last week in Alberta, causing a massive leak of 1.3 million gallons of oil, water and sand. But that’s not all: July has been a banner month for oil spills, and it’s not over yet. The entire year has seen spill after spill, from pipelines and oil train derailments. Here’s a brief recap of just those spills that made it into my files — and the Wisconsin legislature’s capitulation to Enbridge.

According to the CBC, the cause of the mid-July pipeline leak in Alberta has not been determined:

“As the search for what caused a massive pipeline leak in northern Alberta continues, one U.S. oil spill investigator is warning that new pipelines are not always the safest.

“Last week, a contractor discovered a leak in a Nexen Energy petroleum pipeline that spilled five million litres of emulsion — a mix of bitumen, sand and water — outside Fort McMurray, Alta.

The cause of the spill, one of the biggest ever in Alberta, is not yet known. The double-layer pipeline only started operating last year and was equipped with a leak detection system that should have alerted the company to the problem, but didn’t.”

“More than 20 cars on an oil train derailed in rural northeastern Montana, and at least three of them were leaking crude, leading some homes to be evacuated, authorities said.

“There were no immediate reports of injury or fire, but of the 21 cars that derailed Thursday evening, only two remained upright, Roosevelt County Sheriff Jason Frederick said….

“The train was pulling 106 loaded crude oil cars when it derailed close to Culbertson near the North Dakota border just after 6 p.m. MDT Thursday. The cars typically haul about 30,000 gallons of oil apiece.

The Missoulian updated the story on July 17, reporting that, “Four tank cars leaked an estimated 35,000 gallons of oil” in this derailment. The Missoulian quoted Deputy Sheriff Cory Reum as saying, “We’re lucky it didn’t ignite.”

Just a few days before the Alberta oil pipeline leak, a pipeline spilled more than 4,200 gallons of crude oil into Silver Creek and Silver Lake, about 40 miles northeast of St. Louis. The pipeline company didn’t spot the spill, which was called in by a local resident. The Highland News Leader reported:

“The unmanned pumping station is part of the Capwood pipeline, a 20-inch conduit that connects an oil storage facility near Patoka, Ill., with the refinery in Wood River.

“A failure in a small-diameter fitting within the station was to blame for the leak, company officials and state investigators said.

“The Plains’ Control Center in Texas received a call at approximately 7:45 that morning from a citizen who saw oil being released from the station, according to the company.”

While this spill was called “small” by the company, it doesn’t sound insignificant in the UPI report:

“The company said that, as of Sunday, about 2,700 feet of containment boom, nine vacuum trucks and more than 120 personnel were deployed to respond to the Missouri spill. Free oil that migrated to the area’s Silver Creek is kept out of the larger Highland Silver Lake by containment boom.”

Flash flooding was blamed for another, much smaller, California oil spill in mid-July. KCBX reported on July 20:

“‘The spill was caused by storm water runoff that produced a flash flood and uncovered a 4-inch underground oil pipeline which was then bent by the force of the water and subsequently fractured and released an estimated 2 to 5 barrels of oil,’ said Environmental Health Specialist Scott Milner. ‘An alarm then went off which alerted the operators to shut the system down.'”

On May 19, California was hit with a very large oil spill from a pipeline owned by Texas-based Plains All American Pipeline, which, according to NPR, “is reported to have a number of previous infractions.”

“Near Santa Barbara, Calif., oil from a spilled pipeline now stretches across nine miles of Pacific Ocean coastline. The leak itself was stopped last Tuesday. Today, federal investigators are on the scene trying to pinpoint what caused it and why the line didn’t automatically shut off.”

AP reported that firefighters found crude oil gushing out onto the beach and into the ocean:

“Tracing the source, they found crude gushing from a bluff like a fire hose ‘without a nozzle,’ records show.

“But critical time would elapse before the operator of a nearby pipeline would confirm it had ruptured and was the source of the spewing oil. An employee at the scene for Plains All American Pipeline initially suggested to firefighters that the spill ‘was too big to be from their pipeline,’ according to the documents obtained by The Associated Press.”

Cleanup from that pipeline rupture is still continuing, according to the Star Tribune, with estimates of the amount of the spill now at 101,000 gallons of crude oil.

“About of a fifth of the oil flowed into the ocean, killing hundreds of birds and marine mammals, mostly sea lions, and closing state beaches.

“Tar balls traced to the pipeline have been found in neighboring Ventura County and more than 100 miles south on Redondo Beach in Los Angeles County.”

On May 6, Vice News reported Another ‘Bomb Train’ Just Exploded in North Dakota:

“The derailment occurred Wednesday morning outside tiny Heimdal, North Dakota, about 50 miles east of Minot, the BNSF Railway reported. Local news outlets reported the population of fewer than 30 people and a few nearby farms had been evacuated.

“There were no injuries reported, but the state Department of Health urged people with respiratory issues to avoid the smoke.”

In February, after a 109-car train carrying 3.1 million gallons of Bakken crude oil derailed and caught fire in West Virginia, the Department of Transportation predicted 10 oil-train derailments per year. From the Daily Kos:

“A week ago, a 109-railcar train carrying 3.1 million gallons of volatile crude oil from the Bakken Shale of North Dakota derailed in Powellton Hollow, West Virginia. Twenty-seven of the cars went off the rails near the Kanawha River and 19 caught fire, burning for days and forcing an evacuation of more than 100 people there and in nearby towns. Only a relatively small amount of oil spilled into the river, which is one of the most polluted in the nation. Just a few days before there was an oil-train derailment in Ontario.”

Even with all those oil spills in the news, the Wisconsin legislature recently caved in to Enbridge. Dane County Zoning and Regulation Committee was recommending requiring Enbridge to carry insurance providing for clean-up in the event of oil spills. That would have been a condition of building a new pumping facility that would triple the flow of tar sands through the county. According to Dane County supervisor Patrick Miles:

“Enbridge did an end run and got the state Legislature to usurp our efforts to protect Dane County residents. Documents released last week show that an Enbridge lobbyist and a locally hired attorney basically wrote a statutory provision prohibiting counties from requiring insurance to ensure the cleanup of a spill. Not only that, they also wrote a provision that gives Enbridge the power to condemn people’s property. In an act of political cowardice, the provisions were amended to the state budget with no legislator’s name and no opportunity for public notice or debate.”