Growing lettuce at ten below zero 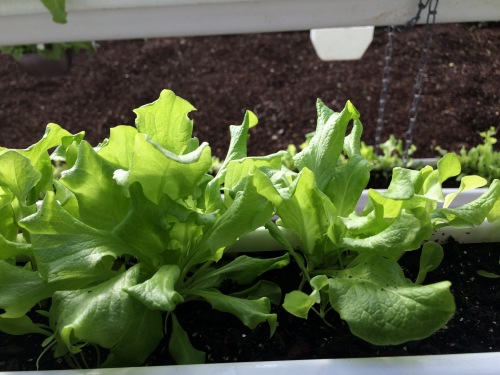 Local lettuce all winter? At St. John’s University and the College of St. Benedict, passive solar greenhouses grow lettuce for college food service, with farming and management by enthusiastic student volunteers. With a few dozen other folks, I visited both greenhouses on a subzero January Saturday, on the first of the Deep Winter Greenhouse Tours sponsored by the Sustainable Farming Association of Minnesota.

Outside, the temperature hovered between five and ten degrees below zero, with windchills closer to minus 20 degrees Fahrenheit. I don’t know the exact temperature, but I had to take off my hat and gloves and unzip my coat inside St. John’s greenhouse. At St. Ben’s, a few hours later, even that wasn’t enough — I felt uncomfortably warm with a coat on. The greenhouses have no grow lights, relying on the power of the sun even at mid-winter. 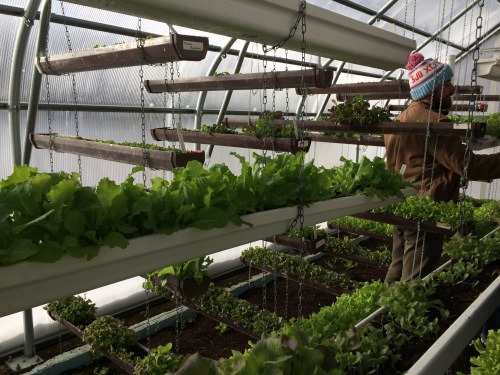 SJU greenhouse raises lettuce in gutters suspended from the ceiling.

Both greenhouses grow lettuce and sell it to the campus food service. At St. John’s, students grow four kinds of lettuce: Black Seeded Simpson, Tokyo Bakana, All Star, and Red Sails. Last year, they grew some other varieties, but discovered that students didn’t like more bitter-flavored greens. In March, they’ll plant tomato seeds and sell the seedlings to students and faculty.

Both greenhouses also grow spinach. St. Ben’s students said they’d like to grow other greens, such as bok choy, but have to wait until students get more willing to try a variety of foods. They might grow herbs for sale to the co-op later in the year. 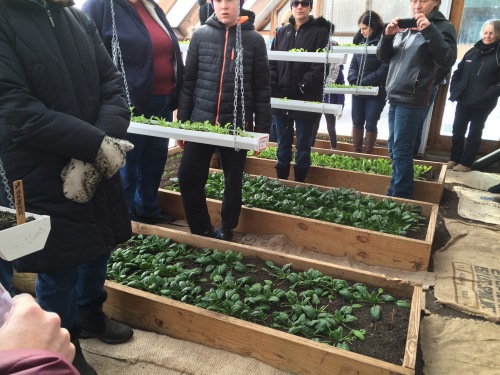 St. Ben’s Full Circle greenhouse has some lettuce growing in suspended gutters, but most plants in raised beds.

Planting decisions balance production, education and community purposes. They could plant more types of lettuce in a single raised bed, but fewer kinds of greens make it easier for student volunteers to tell the difference between the lettuce and weeds. They could plant more densely in the raised beds, but they want to leave room for visiting elementary students to move around the greenhouse and to dig in the dirt. 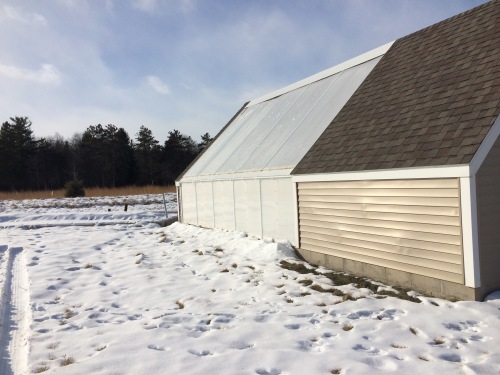 Both greenhouses use a double layer of plastic for a south wall and angled roof. St. Ben’s greenhouse cost only $18,000, and took three years to build, with lots of donated and repurposed materials and volunteer labor and design. (It would have cost even less, a student said, but the first foundation was laid in the wrong direction, and had to be abandoned.) St. John’s greenhouse cost more to build — $70,000 — because it was built in a single winter and had to meet the university’s aesthetics and materials specifications for the campus.

St. John’s has most plantings in gutters suspended in rows from the ceiling. St. Ben’s has a few gutters, and hopes to get more soon, but most planting is in raised bed boxes. (Check out St. Ben’s greenhouse on Facebook — Full Circle Greenhouse.)

St. John’s greenhouse also has a system of pipes for air exchange. St. Ben’s has layers of sand, gravel and pipes underground to help with heat regulation, and uses four large water barrels as heat sinks. “They just sit there!” said a student — no maintenance required. The water in the barrels warms up in the day’s sunshine and slowly releases heat at night. Both greenhouses will supplement solar heat with a single heater, if inside temperatures drop below 45 degrees, which probably happened during the sub-zero night. Not often, though —St. Ben’s students said their heat bill for an entire winter is less than $100. “It’s a really cheap process once it’s up and running,” explained a volunteer.

The college greenhouses aim for different outcomes than commercial greenhouses. Besides producing food, their mission includes building community (especially among volunteers), educating people about where their food comes from, and some experimentation. For example, they are currently trying to replace vermiculite in the soil mix with rice hulls, which take less energy to produce, are cheaper, and are “better for the environment.” 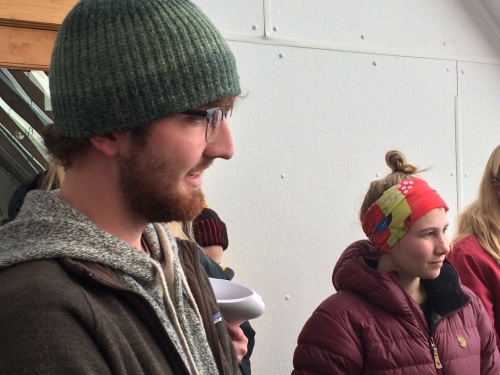 Tanner and Megan, from the CSB “Root Group” explained the greenhouse operation.

The best feeling, said one SJU student, is that “You did something. You did something very worthwhile.” A second student agreed: “Its very concrete. You see what you did.”

The hardest part, agreed CSB students, is that greenhouse volunteers are full-time students, often with paying jobs as well. Like the tour sponsor, the students are committed to sustainability. That, said Megan Lundquist, includes “knowing what your food is and where it comes from.”

SFA, said Jerry Ford, believes sustainability includes environmental stewardship, community, and resiliency, which means both profitability and the diversity in a farming operation that makes survival possible when the unexpected happens. Love — of the land, of farming, of community — ties it all together.

This is the first in a series of articles on Minnesota farming, focused especially on sustainable family farms. If you’d like to tell me about your farm, email me at maryturck AT gmail DOT com