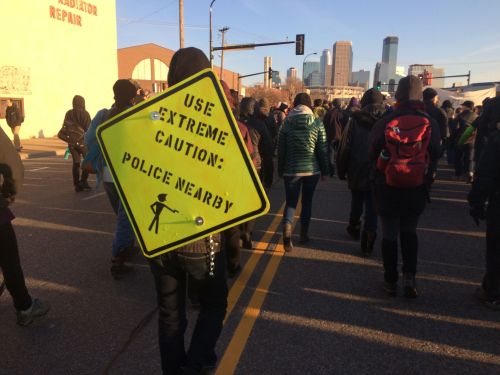 “Plain and simple, if you f*ck with me I’m going to break your legs before you even get a chance to run. Be honest. I don’t screw around.”

That’s what Minneapolis police officer Rob Webber told 17-year-old Faysal Mohammed last March. When one of the teens asked why he was being arrested, Webber responded, “Because I feel like it.”

More than nine months later, Webber finally has been fired, according to WCCO, though the Minneapolis Police Federation plans to appeal his dismissal.

Back in March, four Somali teens were heading home after playing basketball at the YMCA. Webber pulled their car over and hassled them for 45 minutes. Then he let them go, without making any arrests.

But as they were being handcuffed, one of the teens hit record on his cell phone. That’s how the case got any attention at all.

If the young man hadn’t recorded the threats, Webber would still be on the street. How many more people would he have threatened? What other harm would he have done? And, more crucially, why did it take NINE MONTHS to investigate and fire him? (That’s nine months of paid leave, courtesy of taxpayers, by the way.)

Minneapolis Police Federation apologist Bob Kroll claims there is more video and that you can’t judge an officer by 30 seconds.

These two cases are small stuff next to death-by-police cases, such as the November shooting of Jamar Clark in Minneapolis. There’s still no release of videotapes for that case, and investigations are shrouded in secrecy. The case has been sent to a grand jury, and that rarely means prosecution of cops. (I’d refer readers to #BlackLivesMatterMpls Facebook page for more information – but Facebook closed the page today.*)

MPR reports that another Minneapolis officer has been fired. Though there were complaints against Officer Blayne Lehner in 2012 and 2013, it’s not clear what complaint led to his firing now.