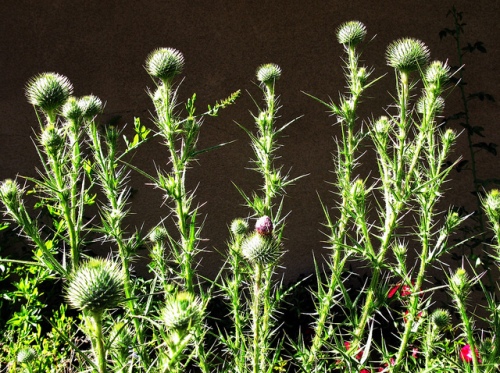 As I dug out weeds in the garden this morning, my thoughts turned to the just-ending legislative session. A bold, bright-eyed robin supervises as I dig out thistles and quack grass, pull creeping Charlie, and leave the milkweed for the butterflies.

Weeding is not my favorite part of gardening, but it’s essential. If I don’t keep at it, the thistles and quack grass will take over and choke out everything else. Still, pulling weeds is pointless, unless you also plant.

This legislative session didn’t plant much. They did get rid of some pernicious weeds: the godawful, hate-filled bathroom bills, the showy but ultimately stupid blaze pink hunting coat bill, the private prison proposal, the pointless purple-as-the-state-color bill. But planting for the future? Not so much.

The legislature did plant a few small items:

They also passed a tax bill. The tax bill had some good features: tax breaks for people with enough money to invest in 529 plans to fund their kids’ college educations, some tax credits for students paying back student loans, some property tax cuts for farmers and small businesses, veterans and the elderly.

Some of the weeds stayed in, too – a tax break for tobacco companies. And, of course, tax breaks for the soccer stadium, the Super Bowl, and luxury stadium suites. After all, we can’t neglect the struggling and impoverished sports sector of the economy.

At the last minute, the legislature passed a budget bill. Session Daily summed it up:

Take a look at that last line item: Health and Human Services: $0. That means no increase in the MFIP allotment. As Patrick Ness tweeted:

Minnesota’s MFIP allotments — the welfare program that supports Minnesota’s poorest children and families — have not increased since 1986. Thirty years. As I wrote back in February, Minnesota’s children deserve better.

The $25 million allotted for preschool education falls far short of the $100 million that Governor Mark Dayton asked for. So does the amount slotted for racial equity, in a state where our racial disparities in education and employment are worse than those in Mississippi. Broadband infrastructure is similarly underfunded. Broadband infrastructure means improving the infrastructure for rural Minnesota, which will help level the playing field for communication, for employment, and for emergency services. When I visit some friends in rural Minnesota, I can’t get either cell phone or wifi connection. Think about what that means in today’s wired economy.

Will Dayton sign the budget bill, with all its shortcomings? He has 14 days to decide. Republicans are already talking about a special session to pass legislation that they stalled for the entire regular session.

“I don’t see any reason to have a special session,” Dayton said in a press conference Friday. “They have 48 hours to get their work done, and they’ve had 11 weeks. They started working on a lot of this formally last November. They’ve had all this time. If they can’t their work done then they haven’t gotten their work done.”

You’d think the legislature could plant more in a year when the state is looking at a budget surplus of $900 million. Instead, the Republicans leaned on their shovels and waited out the session.

Now it’s up to the voters. All the Minnesota House and Senate seats are on the ballot this fall. I hope that Minnesotans get down to some serious weeding in November.

One response to “Quack grass, thistles and the Minnesota legislature”