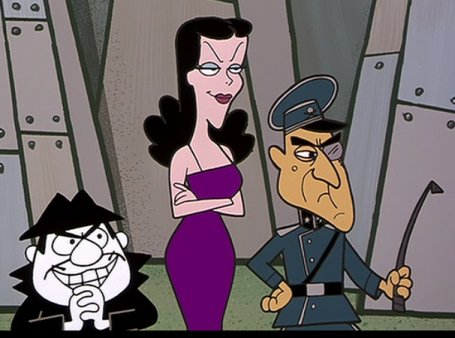 Boris Badenov, Natasha Fatale, and Fearless Leader were cartoon representations of Russian spies in the Rocky and Bullwinkle cartoon (1959-1964). Any resemblance between comic cartoons and current political rhetoric is purely intentional.

On December 29, the New York Times headlined, Obama Strikes Back at Russia for Election Hacking. As news consumers, what questions do we need to ask about that story?

Question #1: What is this “election hacking?”

When I read “election hacking,” I think of hacking voting machines or state election sites or voter registration lists. That’s not what happened here. Not even close.

The “Russian election hacking” story isn’t about hacking elections at all. It is about somebody hacking the email accounts of Democratic Party officials and then making those emails public. That might be revealing private information, but it is not hacking an election.  In its first paragraph, the New York Times backs off from the headline, referring instead to “efforts to influence the 2016 election.”

There is NO evidence of hacking the election itself – ballots, votes, systems. The only alleged evidence is about hacking email accounts of political party officials – not even government officials.

Question #2: What is the evidence?

The Washington Post’s December 16 headline read: FBI in agreement with CIA that Russia intended to help Trump win White House. That’s interesting, if true. Even more interesting is that the story’s first sentence opens with FBI Director James B. Comey. Remember him? He’s the guy whose accusations about Hillary Clinton’s emails during the closing days of the campaign were a major factor in erasing her lead in the polls.

Official stories make much of the fact that the FBI and CIA agree that Russia tried to help Trump. They don’t say how. They say that’s classified information. So instead of actual evidence, we are left with “trust us” kinds of allegations by U.S. government officials and U.S. intelligence agencies.

As Matt Tabibi wrote in Rolling Stone about the larger Russia story:

“The problem with this story is that, like the Iraq-WMD mess, it takes place in the middle of a highly politicized environment during which the motives of all the relevant actors are suspect. Nothing quite adds up.”

The U.S. government released one supposedly definitive report on December 29 (critiqued here), and promises another on January 6.

We don’t know who the email hackers are. The most geeky, authoritative-sounding stories toss around names like APT28, APT29, CozyBear, Grizzly Steppe, and X-Agent. None of the stories tells us who the email hackers are. Some claim that the “intelligence agencies” have identified Russian software that was used. Although, as cybersecurity expert Jeffrey Carr pointed out back in June, even Russian software doesn’t mean Russian responsibility:

“In the physical world of crime investigation, common sense dictates that the perpetrator of a crime may use any weapon and not just one made in the country of his birth, and that the developer or manufacturer of the weapon most likely isn’t the criminal.”

Maybe Russian nationals stole the DNC emails. Even that would not necessarily make it a government operation. Maybe Vladimir Putin directed or approved of the theft. He’s an authoritarian, self-aggrandizing, misogynistic megalomaniac. That might make it a Russian government operation. Or not. He might just want to lend a helping hand to Trump, a man he can understand. Or Putin might want to get back at Hillary Clinton, an old enemy.

This is all conjecture, all guess work in the fog. As Sam Biddle wrote in The Intercept, we have no real evidence of Russian government involvement:

“There is strong evidence indicating that Democratic email accounts were breached via phishing messages, and that specific malware was spread across DNC computers. There’s even evidence that the attackers are the same group that’s been spotted attacking other targets in the past. But again: No one has actually proven that group is the Russian government (or works for it).”

Because of Putin’s political positions and because of Russia’s older, better-documented trolling operation, I think it’s likely that Putin/the Russian government actually are behind the email shenanigans. Many factors contributed to Clinton’s defeat. A single, silver-bullet explanation is just wrong, attractive as demonizing Russians may seem to some.

Question #4: What difference does it make?

If the Russian government tried to influence U.S. presidential election, how serious is that? We do the same damn thing, year after year in country after country.

Go back to 1948 – the CIA delivered millions of dollars, literal suitcases full of cash, to influence the Italian elections. It succeeded, and continued to meddle in (“influence”) those elections for 24 years, as the very CIA officials who were involved proudly proclaimed in the 1990s.

That involvement pales next to unsuccessful CIA intervention in Chilean elections in 1964, and its subsequent support for a coup that overthrew the democratically elected government, as described here in the official CIA report.

These are just two examples in a long history of U.S. intervention in elections in other countries, which still continues today. So, if the CIA says the Russian government tried to influence U.S. elections, maybe they know what they are talking about. The CIA pretty much wrote the book on intervening in foreign elections.

Does that make it okay for Russians to try to influence the U.S. presidential election? Ariel Dorfman, a Chilean during the time the U.S. subverted their electoral process, is now a U.S. citizen. He writes:

“I can savor the irony, but I feel no glee. This is not only because, as an American citizen myself now, I am once again a victim of this sort of nefarious meddling. My dismay goes deeper than that personal sense of vulnerability. This is a collective disaster: Those who vote in the United States should not have to suffer what those of us who voted in Chile had to go through. Nothing warrants that citizens anywhere should have their destiny manipulated by forces outside the land they inhabit.”

So, yes. “Nefarious meddling” in another country’s elections is a big deal – just a different kind of big deal than the “Russian hacking” headlines suggest. And the biggest danger may not be the impact on elections, but the overall impact of trolling, disinformation, and propaganda to promote “an atmosphere of uncertainty and paranoia, heightening divisions” within U.S. civil society.

What can we learn from the bad headlines and sketchy coverage of this story? Lots more than I have space to discuss here, but I hope that if you have read this far, you will take away three important lessons:

1) Read the whole story, not just the headline. Read carefully, even suspiciously.

2) Look for the evidence. Who said what? Are sources identified or anonymous? Who has expertise? (In this story, I looked at writing by Adrian Chen, who has reported and written extensively on Russian cyber-warfare, at an analysis by the security editor at Ars Technica, and cybersecurity consultant Jeffrey Carr.)

3) Look for what’s missing. In this case, looking at U.S interference in elections around the world for the past 70 years makes this year’s email leaks seem substantially less significant.