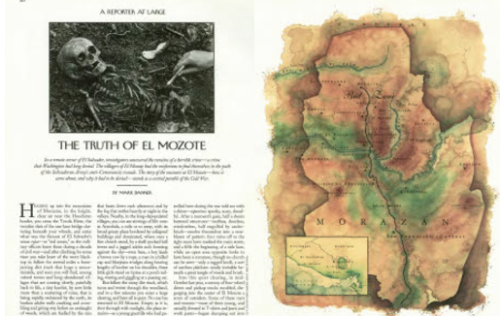 UPDATE 2/13: Abrams is out! Not because he’s an all-around nasty piece of work (see below) but because he didn’t support Trump in the primaries.

Elliott Abrams avoided a felony conviction for his official crimes during the Iran-Contra era by pleading guilty in 1991 to misdemeanor charges of withholding evidence from Congress. Then he returned in the State Department under Bush II. Now he may be coming back for a third act as second-in-command in the Trump State Department. According to the New York Times, Abrams “is described politely in foreign policy circles as a ‘controversial’ figure, but that deeply understates the case.” I think calling him a war criminal would not be overstating the case.

“Three years earlier, when two American journalists reported that an elite, US-trained military unit had massacred hundreds of villagers in El Mozote, Abrams told Congress that the story was commie propaganda, as he fought for more US aid to El Salvador’s military. The massacre, as has since been confirmed, was real. And in 1993 after a UN truth commission, which examined 22,000 atrocities that occurred during the twelve-year civil war in El Salvador, attributed 85 percent of the abuses to the Reagan-assisted right-wing military and its death-squad allies, Abrams declared, ‘The Administration’s record on El Salvador is one of fabulous achievement.’ Tell that to the survivors of El Mozote.”

Abrams also orchestrated the illegal Iran-Contra arms deals, in support of right-wing Nicaraguan forces seeking to overthrow the government. While he received a presidential pardon for crimes committed during the Reagan years, he was later censured by the U.S. Court of Appeals for his “dishonesty, deceit or misrepresentation” while in office. The Walsh Report on Iran-Contra, prepared in 1993 by the Independent Counsel for the U.S. Court of Appeals, District of Columbia, found:

“In the course of his work, Abrams became aware of North’s efforts to assist the contras militarily, despite the Boland prohibition on U.S. aid. Abrams also was directly involved in secretly seeking third-country contributions to the contras. … On October 7, 1991, Abrams pleaded guilty to two misdemeanor charges of withholding information from Congress. Abrams admitted that he withheld from the Senate Foreign Relations Committee and the House Permanent Select Committee on Intelligence (HPSCI) in October 1986 his knowledge of North’s contra-assistance activities.” [footnotes omitted]

The biggest reported objection to Abrams return to the State Department is his opposition to Trump’s presidential candidacy early last year. The Times observes that, “In ordinary times, nominating Mr. Abrams would set off tremendous opposition, especially from the left,” but since Trump’s administration is so erratic and unpredictable, even a former Obama advisor sees Abrams as “serious, responsible and knowledgeable.”

God help us all.

What you can do:

Abrams is being considered, but has not yet been officially nominated, for the number two State Department position. This is a position that requires Senate confirmation. Call Senators and ask that they oppose any role for Abrams in the U.S. State Department, and vote against him if he is nominated.