Taking down ‘Scaffold’ at the Walker 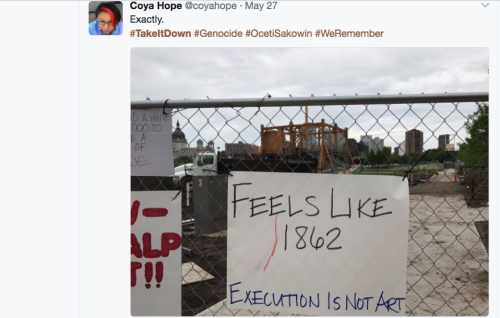 A tall gallows structure stands in the Minneapolis Sculpture Garden, near the iconic Cherry and Spoon, the new Giant Blue Chicken, and the mini-golf course. But not for much longer.  After an outpouring of pain and anger from Minnesota’s Native American community, the Walker has agreed to remove ‘Scaffold.’

Sam Durant, a white Los Angeles artist, first created ‘Scaffold’ in 2012 in Germany, and the sculpture has been exhibited in other cities. The sculpture features gallows from seven hangings. The largest one, which supports all the rest, is a model of the Mankato gallows  on which 38 Native American men were hung on December 26, 1862 in the largest mass execution in U.S. history. The Walker planned carefully for the opening of the new sculpture garden, but they failed to consult Minnesota’s Native American communities.  before erecting ‘Scaffold.’

Over and over, the Native Americans denouncing the sculpture repeat: we were not consulted, we were not listened to, our voices are not heard. Rather than adding my voice to the discussion, I want to amplify their voices in this blog post:

“When I first saw it, I had this huge anxious feeling and broke down in tears,” says Kate Beane, a Dakota woman who works as a community liaison for the Minnesota Historical Society. “I don’t think the Walker or the artist took into consideration what kind of impact a structure like that would have on a community of people who have been impacted by historical trauma.”

It was the mockup of kids playing on it that got me.

The language comparing it to a play structure. White folks having a great day on a gallows designed to evoke the exact imagery from the largest mass execution in US history. White folks whose great-greats stood and cheered as those 38 men hung, who went to see Little Crow’s remains on display. Now taking selfies on this evil structure.

Their children running up and down the stairs, stairs just like the ones that 38 Dakota men ascended, singing, and never came back down.

I was sitting in my office on Friday afternoon when I got word of the new Sam Durant piece “Scaffold”, installed in the remodeled Sculpture Garden at the Walker Art Center. I dove deep into everything I could find. Who? What? How? Why? Why was this happening in this city I love?

It is such evil. It is such absurd violence. It’s a publicly-funded hate crime. I can’t even explain the layers of hurt….

As an indigenous artist that does both installation and public artwork, I understand the value of provocative work. But the work of Sam Durant is not art. It is an act of violence. It is a slap in the face of the Dakota people, whose families were hung on a nearly identical gallows in the town square of Mankato. This piece, erected without consultation of the Dakota community, is a reminder that might be a thoughtful conversation/play structure for the white children of Kenwood, but it’s a trigger of five centuries of historical trauma in the indigenous community.PPe

1. Cherry on a spoon 2. Gigantic blue chicken 3. Gallows used to hang 38 Dakota men *one of these things is not like the other* #TakeItDown

Listen, I’ve had conflicts with other news outlets over the years on account of my editors didn’t want me writing about Native American issues they deemed controversial. While that was frustrating, it wasn’t so much that I ever quit a job over it.

Today I asked my editor at the Walker to take down all the content I ever wrote for them, though. As long as they have a replica of the Mankato gallows in their sculpture garden, it will all stay down and I’ll refrain from doing any more work with them.

My grandmother once told me the settlers left the original gallows partly intact as a monument, and it stayed there in the center of town until erosion finally destroyed it, and that she used to see it when she was in Mankato as a child. I don’t know how much of that was a tall tale, but I know her parents and grandparents lived through the conflict, the exile, and the mass hanging. I know that affected her all of her life.

I can’t imagine what she would say if she had lived to see me working for people who bought a scale replica of the thing and put it on prominent public display on public land.

A lot of people have been telling me this is the first they’ve heard of the hanging. They have been asking where they can learn more. So, set aside an hour and start with this. After that, if you want to know more, do literally anything that doesn’t involve visiting a playground built to look like the mass gallows.

“We were not consulted in the first place, and we want our true representation to come from the elders who have the stories. The irony is that they have been talking about this their whole lives and nobody listened to them.”

You Are on Dakota Makoce (Land)

Mni Sota- Minnesota, is the ancestral land of the Dakota Oyate (Nation). In the beginning of the colonization of Minnesota, the U.S. Government was violently forcing Dakota People to cede land. The Dakota People thought that if they ceded land to assimilate to keep the peace, they would in return gain rights for farming and education.

What brought about the hanging of 38 Dakota Warriors in Minnesota December 26, 1862 was the failure of the U.S. Government to honor its treaties. Dakota People were not given the money or food set forth to them for signing a treaty to turn over more than a million acres of their land and be forced to live on a reservation.

This is a genocide view of what has happened to our Nation, which is still happening as we speak, because any kind of creations carry energy, and in this case; can carry division and death energy.

For many years we have been riding horseback, walking and running to carry a message of healing to the site of the 38 Dakota plus two, where our relatives hung in Mankato, Minnesota. We are still healing from this tragedy, which was the largest execution in the United States of America. What we create now is a focus of Unity and healing the Sacred Hoop of who we are as a Nation.

Today across America there is a lot of racism building, in which we are trying to still maintain Peace. After great thought of this issue, I know that this man who created this structure has a good heart, but does not know any better. I am aware his understanding is different than our own culture, and in his view was trying to bring awareness. So now we have become aware of one another’s boundaries in what we create to memorialize our loved ones….

So, I would like to add my voice to take the death scaffold down as soon as possible, so we may live in Peace.

The artist has apologized for failing “to understand what the inclusion of the Dakota 38 in the sculpture could mean for Dakota people,” and the Walker has agreed to remove the sculpture, and to move the grand opening of the sculpture garden back one week, to June 10. Dakota Elders will meet on Tuesday, May 30 “to discuss how to respond to the “Scaffold” sculpture” and “to make decisions about the priorities for next steps for the structure.” Then twelve Elders will meet with the Walker Art Center, Minneapolis Park and Recreation Board, and the artist on Wednesday, May 31.

“All Dakota are encouraged and invited to respond with their insights in this process. This is an opportunity for parents to engage the children in learning about their history and for the students and professions to use their position to help share our truth, our history. Because of the quick timing of this first meeting and the fact that many Dakota cannot travel to this meeting, you may send/share your response to an Elder who will carry that intention forward in prayer to the meeting.”

This mediation meeting will be followed by a press statement at 2 p.m. on Wednesday, May 31. The statement concludes:

“We call upon all Dakota to pray for wisdom and for healing. We request that all press wait for the joint announcement on Wednesday after our private mediation meeting rather than seeking individual statements from our community. We ask all non-Dakota allies to not take action on our behalf; please respectfully allow us space to conduct our process in our way and timing, that we may heal.”