Saying no to hate, saying yes to fairness and equality and caring 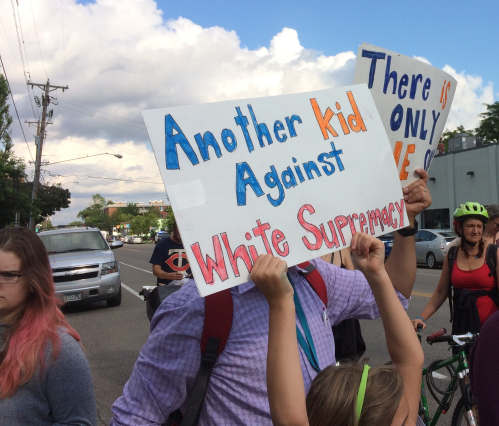 If you have spent the last five days reading and watching and thinking about Charlottesville and the quiet heroism of Heather Heyer and the blatantly in-your-face racism of Unite The Right and the stupidly incoherent racism of the president of the United States, you probably won’t find anything new here. I cannot find anything new to say, but I feel compelled to summarize facts as the president tells lies. That’s a small enough thing to do, but it seems to be all I can do to keep faith with the people who stood up to racism and hate and with a young woman whose life was senselessly taken away by that racism and hate.

The violence did not start on Saturday, when a young white man who was a Hitler fan in high school rammed his car into a crowd of counter protesters. On Friday night, the white mob attacked a black counter-demonstrator, an assistant special education teacher:

“They were trying to kill me out there,” Harris recalled. “The police didn’t budge, and I was getting beat to a pulp.”

“In the garage, Harris fell against the garage entrance gate, snapping off the wooden arm and dropped to the ground. One of the marchers picked up the board and started hitting Harris with it, while others surrounded him and continued to pummel him with blows, video of the attack shows.

“With blood pouring from his head, Harris tried to get back up but kept falling down under the continuous blows.

“Vonzz Long, 23, who saw the attack on Harris, said that he implored police to come his friend’s help, but that they ignored him.”

On Friday night, the torch-carrying white mob menaced a black church. Rev. Traci Blackmon told her story to MSNBC. She described the packed church, the warnings about not leaving, the fear of staying in place. This is not “the olden days,” the “civil rights era,” but right now in the 21st century.

The president equivocated, waited to condemn hate, then repeatedly tried to blame “both sides,” defending the racists and Nazis and white supremacists. What did the congregation inside that church do? How were they in any way to blame for the Unite The Right mob that menaced them? “Both sides” is a lie, a whopping, racist presidential lie.

Referring to the anti-racist counter protesters, Trump asked: “What about the fact that they came charging with clubs?”

But they did not.

“The violence was initiated, on Friday night, by right-wing marchers who assaulted protesters around a statue of Thomas Jefferson. While both counterprotesters and marchers engaged in some throwing of water bottles and rocks on Saturday, the marchers were the ones projecting a military presence and who initiated the bulk of the confrontations. The image Trump evoked, of a mass of counterprotesters “charging with clubs,” is a complete invention.”

On Saturday, a young admirer of Hitler used his car as a weapon. He killed Heather Heyer, and injured 19 more people.

Heather Heyer was not a counterprotester “charging with clubs.” She was not a carpetbagger coming from a northern liberal state to make trouble. She was a resident of Charlottesville, one of many good people who stood up to the Nazis and racists who invaded her city. Listen to her mother’s words:

“Our daughter did not live a life of hate, and hating this young man is not going to solve anything. . . . It’s not that I think he should go unpunished for his crime. But hate only engenders more hate, and there’s no purpose in hate,” Bro said. “Heather’s life was about — passionately about — fairness and equality and caring, and that’s what we want people to take away from this.”

I want to focus on Heather’s passion and her life. I want to respond as she did:

Over the years, Heyer would ask people why they came to their beliefs. Heyer’s friends told her mother that she was at it again during the demonstrations Saturday, going up to people with opposing views and asking them “Why do you believe this?” or “Why do you think this way?”

Fairness and equality and caring: Heather’s lasting legacy and challenge to us all.

For a thoughtful, nuanced discussion, listen to Code Switch on Charlottesville:

Or if you’d rather read, here is Code Switch’s Making Sense of Charlottesville: A Reader’s Guide.

Want to hear what the Unite The Right racists have to say? Here’s a Vice documentary with extensive interviews. Warning: you’ll need a strong stomach for this.

2 responses to “Saying no to hate, saying yes to fairness and equality and caring”