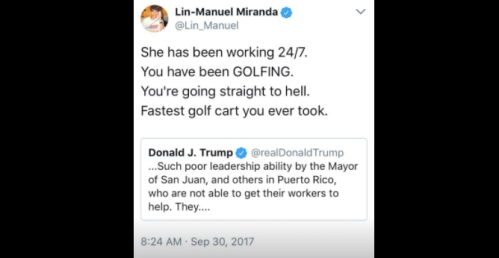 Yom Kippur is a day of fasting and repentance. It is a day to reflect on what we have done wrong in the past year, and to ask forgiveness. Unless you are the president of the United States. Then it is a day to attack anyone who dares to call you to account.

Lin-Manuel Miranda has it right – Trump’s disgraceful attack on the mayor and people of Puerto Rico follows weeks of the Trump administration’s neglect and mishandling of hurricane preparation and relief efforts. Here’s a short list, followed by a list of ways you can contribute to help rebuild Puerto Rico:

Sending help: One week after the September 20 hurricane, the Los Angeles Times reported:

“Increasingly desperate local officials have demanded more help from the federal government, and faster delivery of what aid is coming.

“They’re going very slowly, the aid isn’t getting to people fast enough. We seem to be losing a lot of time in jurisdictional trifles,” San Juan Mayor Carmen Yulin Cruz said in an interview Wednesday.

“People are dying,” she said. “We don’t have time for that.”

In Rio Grande, a city of 54,000 people east of San Juan, Mayor Angel “Bori” Gonzalez told the Los Angeles Times that he was lucky to have a cell phone, but that FEMA wasn’t returning his calls:

“We saw through the TV how FEMA responded immediately to Texas and immediately to Florida,” said Josue Medina, an interpreter who was accompanying the mayor on Wednesday. “They’re still taking into account what resources they need here, [and] it’s been seven days.”

Jones Act: Another example of the Trump administration’s failure to help was its initial refusal to waive the Jones Act, which says only U.S.-flagged ships can deliver relief goods from one U.S. port to another without paying a tariff. When Hurricanes Harvey and Irma hit Texas and Florida, the administration immediately waived the Jones Act. It refused to do so for Puerto Rico for more than a week, when repeated pleas from Puerto Rico generated widespread publicity and political pressure.

The Los Angeles Times succinctly explained the impact of the Jones Act on Puerto Rico, both after the hurricane and in normal times:

“The Jones Act entered the news this week after the federal government waived its restrictions to ease relief efforts for Texas and Florida after their recent hurricanes, but not for Puerto Rico, whose stranded residents are desperate for water, food, medicine and other basic supplies….

“For years, Puerto Rican politicians have complained that forcing the U.S. island territory to rely on American-flagged ships — even with foreign ships in abundance in its ports — drives up the cost of basic goods there. The cost of living is higher on average compared with the mainland.

Paying to get out: Mark Cuban, owner of the Dallas Mavericks, and Pitbull, an entertainer and investor, sent their private jets to deliver supplies and to evacuate people from Puerto Rico. In contrast, the U.S. government requires non-citizen evacuees to sign promissory notes for the cost of their evacuation, and holding their passports as collateral until they pay. (MarketWatch report, September 28)

CORRECTION VIA BillMoyers.com: Correction: Last week, we linked to a story by Marketwatch which claimed that the federal government was charging evacuees from Puerto Rico and the US Virgin Islands full commercial fares to evacuate them — and holding their passports until they paid up. It turns out that the story was untrue — as John Bowden reported for The Hill, they only charged evacuees from non-US territories in keeping with longstanding US policy.

Sending sympathy: Trump tweeted sympathy to Texas and Florida after Harvey and Irma, but said almost nothing about the devastation of Puerto Rico by Hurricane Maria on September 20. Or on the 21st, 22nd, 23rd, 24th. He was too busy tweeting about football players.

When he did get around to noticing the hurricane, he tweeted:

“Texas & Florida are doing great but Puerto Rico, which was already suffering from broken infrastructure & massive debt, is in deep trouble.

“It’s old electrical grid, which was in terrible shape, was devastated. Much of the Island was destroyed, with billions of dollars … owed to Wall Street and the banks which, sadly, must be dealt with. Food, water and medical are top priorities — and doing well. #FEMA”

“Dammit, this is not a good news story. This is a ‘people are dying’ story. It’s a life-or-death story.”

The next day Duke acknowledged that the situation in Puerto Rico was “not satisfactory.” U.S. Army Lt. Gen. Jeffrey Buchanan, a three-star general appointed to lead the U.S. military relief efforts, said that the response to date “is not enough.”

While these officials managed to admit problems, Trump did not. His angry response: the mayor had been told by Democrats to criticize him, and the problem is with her and with the Puerto Ricans who have been working night and day:

“Such poor leadership by the Mayor of San Juan, and others in Puerto Rico, who are not able to get their workers to help They…

“…want everything to be done for them when it should be a community effort. 10,000 Federal workers now on island doing a fantastic job.”

If you want to help

Giving tzedakah, charitable contributions, are also part of Yom Kippur tradition. Whether that’s your tradition or not, if you want to stand with San Juan Mayor Carmen Yulín Cruz and Rio Grande Mayor Angel “Bori” Gonzalez and the people of Puerto Rico, here are some places to give:

UPDATED 10/6/17 – via BillMoyers.com – Correction: Last week, we linked to a story by Marketwatch which claimed that the federal government was charging evacuees from Puerto Rico and the US Virgin Islands full commercial fares to evacuate them — and holding their passports until they paid up. It turns out that the story was untrue — as John Bowden reported for The Hill, they only charged evacuees from non-US territories in keeping with longstanding US policy.