Beating up on kids in custody: a tradition since at least 2009 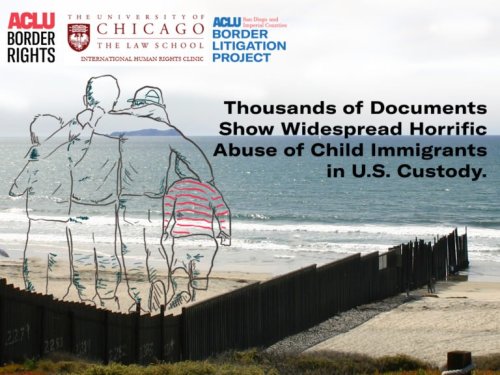 On May 22, the ACLU released a report documenting horrendous abuse and neglect of unaccompanied immigrant children detained by the U.S. Customs and Border Protection. The ACLU produced the report together with the International Human Rights Clinic at the University of Chicago Law School. Examples of abuses reported by the ACLU include allegations that CBP officials:

These abuses are not new: the report is based on more than 30,000 pages of documents from 2009-2014. That means the abuse was going on under the Obama administration.

Customs and Border Protection (CBP) is a sub-agency of the Department of Homeland Security (DHS). CBP takes custody of migrant children when they are apprehended at or near the border, and holds them until they are either deported or transferred into the custody of Office of Refugee Resettlement for longer-term detention or placement. The law says CBP can only hold children for 72 hours, but the ACLU report says that time limit is sometimes ignored, and that CBP officers try to deport children “without due process and via coercion.”

The abuses have been ignored by those responsible for investigating children’s complaints.

“In  direct  violation  of  federal  law,  DHS  does  not  appear  to  have  reported  alleged  child  abuse  out  to  the  FBI.  Moreover,  records  of  the  investigations  conducted  by  DHS  oversight  agencies  like  CRCL  and  OIG  indicate  systemic  failures  to  meaningfully  investigate  the  allegations,  including  a  lack  of  independent  fact  finding,  ineffective  reporting  systems,  and  routine  closure  of  investigations  due  to  agency  delays  and  unreliable  record  keeping.  The  records  provide  no  indication  that  DHS  has  taken  any  remedial  or  disciplinary  measures  to  hold  any  individual  accountable  for  these abuses.”

The report is based on documents obtained through the Freedom of Information Act. Immigration authorities resist and delay releasing information that, under law, is public. That is why the report does not include more recent information. There is no reason to believe that CBP is behaving any better under Trump.

If you think this is wrong, that this is not who we should be as a country, call your Congress member and Senators and tell them.