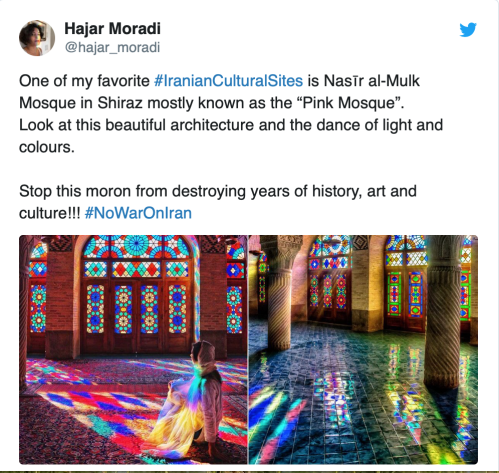 This morning, Pompeo tried to walk back the threat, since targeting cultural sites is forbidden under both the 1949 Geneva Convention and the 1954 Hague Convention for the Protection of Cultural Property.

“Secretary of State Mike Pompeo, who appeared across the Sunday public affairs shows, struggled to explain Trump’s warning. He did not directly state whether cultural centers in Iran would be considered fair targets, but insisted that any U.S. action would be legal.”

Trump doubled down on his threat, insisting that he meant every word he said. He told reporters aboard Air Force One:

Speaking of how things work, here’s Trump’s notice to Congress about his latest act of war / declaration of war:

That’s not how it works. Twitter is not the way the President of the United States communicates with the U.S. Congress. Twitter is not legal notice of anything. And the president cannot declare war by giving Congress notice via Twitter.

War powers do reside in Congress under the U.S Constitution. The president ought to read the War Powers Act.

So the House Foreign Affairs Committee got at least two out of three sentences right. Only time will tell whether Congress has the backbone to make the third true.