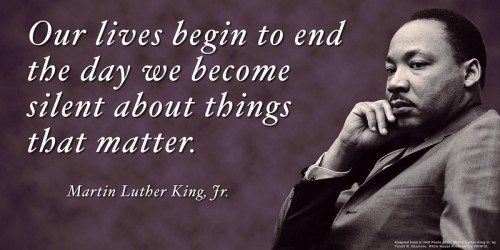 I find it hard to read about Martin Luther King, Jr. on his day, much less to write about him. My heart is too full, still, of memories of him, and of the years of struggle following his assassination. This year, though, it seems especially important to reflect and to reclaim the dream of an America-that-could-be, a dream he preached so clearly, a dream still so far from realization in our America-that-is. I read three reflections that moved and inspired me today, and want to share them with you.

The first comes from Heather Cox Richardson, a history professor at Boston College who writes a daily blog called Letters from an American. She writes about heroes, and quotes a passage from the speech Dr. King gave on the night before he was assassinated, which seems especially appropriate today:

“Dr. King told the audience that, if God had let him choose any era in which to live, he would have chosen the one in which he had landed. ‘Now that’s a strange statement to make,’ King went on, ‘because the world is all messed up. The nation is sick. Trouble is in the land. Confusion all around…. But I know, somehow, that only when it is dark enough, can you see the stars.’ Dr. King said that he felt blessed to live in an era when people had finally woken up and were working together for freedom and economic justice….

“People are wrong to say that we have no heroes left.

“Just as they have always been, they are all around us, choosing to do the right thing, no matter what.”

The second blog post comes from Vu Le, a nonprofit leader who blogs with humor and passion at Nonprofit AF. He writes about the work we all must do to bend the “arc of the moral universe” toward justice:

” I know things are dire. I know many of us are exhausted; I am too. Continents are burning; Neo-Nazis are marching; 162 billionaires have the same wealth as half the population on earth. But all of us must get over whatever sense of despair and despondency we feel, because our communities are relying on us. Children and families traumatized at the border are relying on us. Innocent people getting killed because of racism are relying on us. People and animals whose lives will be severely affected by the devastation brought by climate change are relying on us….

“I have to figure out what my role is moving forward. All of us do. We need to stop quoting Dr. King, feeling good about ourselves, and then continuing to do the same old crap that hasn’t worked for generations. We did not get into this field to be ineffective, or to harm the people we are supposed to help. If we are going to bend the arc toward justice, we must each be bold, or get the hell out of the way of the people who are.”

For some very specific suggestions, check out the blog post: It’s 2020: Be bold or get the hell out of the way.

Finally, Michelle Alexander looks back over the ten years since her book, The New Jim Crow, was published, and ahead to the work that lies before us. Her book addressed mass incarceration and specifically, the mass incarceration of people of color that resulted in the United States having the highest incarceration rate in the entire world.  Her op/ed column in the New York Times offers an incisive analysis of the intersection of racism, mass incarceration, and mass deportation:

“In recent decades, the system of mass incarceration has stripped away from millions of U.S. citizens basic civil and human rights until their status mirrors (or dips below) that of noncitizen immigrants within the United States. This development has coincided with the criminalization of immigration in the United States, resulting in a new class of ‘illegal immigrants’ and ‘aliens’ who are viewed and treated like ‘felons’ or ‘criminals.’ Immigration violations that were once treated as minor civil infractions are now crimes. And minor legal infractions, ranging from shoplifting to marijuana possession to traffic violations, now routinely prompt one of the nation’s most devastating sanctions — deportation….

“White nationalism, at its core, reflects a belief that our nation’s problems would be solved if only people of color could somehow be gotten rid of, or at least better controlled. In short, mass incarceration and mass deportation have less to do with crime and immigration than the ways we’ve chosen to respond to those issues when black and brown people are framed as the problem.”

Each of these writers offers a clear and devastating critique of the present moment, but none of them despairs of the future. Instead, they sound a call to action, to take up the struggle and to reclaim the dream. That’s a message for today and every day.