Who’s Rioting and Why 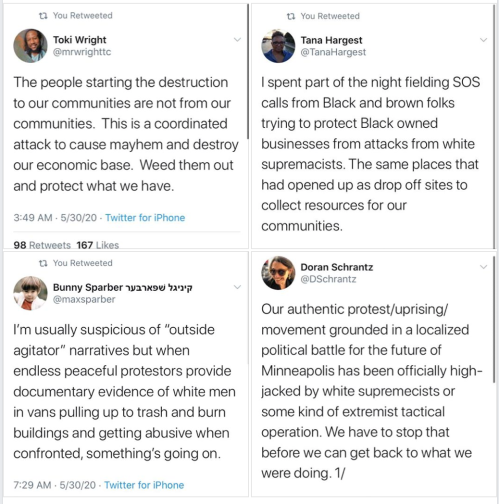 Local voices tell the same story: white men in vans setting fires, protesters trying to stop arsonists, a white man with a hammer smashing windows, people coming from outside to destroy community institutions. The governor and other public officials insist that the rioters come from out of town, many from out of state.

Is that true? Where are these “outsiders” from?

The first reports from public officials proved less than accurate, and right now we just don’t know. We won’t know with any certainty and accuracy until all of this is over. 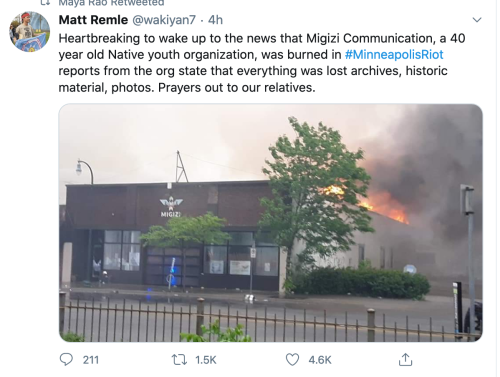 East Lake Library was attacked and vandalized. Protesters tried to stop the attack, but the vandals would not listen.

We do know that in St. Paul, destruction began in daylight on Thursday with dozens of people looting the Midway Target store. This was not an organized protest. The looters ran when police came, broke windows in another store, ran, hit another store, ran, returned. The pattern was set: throughout the afternoon and night, destroyers moved along University Avenue and also hit the East Side, Highland, Grand Avenue, Cathedral Hill. Others moved on Roseville and Richfield and other suburbs.

The Star Tribune and others called this “flash looting.”  A Facebook post described it as “very well organized” with “carloads of people with vehicles that have stolen plates driving quickly through the city going business area to business area…. The police can’t seem to keep up as they are moving all over St. Paul constantly.”

According to reports in Bellingcat and Vice, some of the people coming from outside Minneapolis and outside the state are aligned with a loose confederation whose aim is civil war in the United States. Their ideology includes “accelerationism:” violence to hasten what they believe will be a race war. Many identify with “Boogaloo.”

From The Intercept on May 7:

“According to experts at the ADL who track this stuff, a lot of these protests and rallies in state capitols have provided a new and influential platform for extremist groups — domestic extremist groups — like members of the Three Percenters, a radical anti-government militia; or the Proud Boys, a violent neofascist group; or armed “boogaloo” activists — these are the people who think another civil war is just around the corner. They’ve all made their presence very clear at many of these protests.

“Just this past Monday, the anti-government militia group the Oath Keepers openly threatened any police officers who enforce stay-at-home orders, or try and prevent anti-lockdown rallies.

“Meanwhile, swastikas and Confederate flags have been spotted at some of these rallies. Surprise! Protesters have even accused the governor of Illinois, J.B. Pritzker, who is Jewish, of being a Nazi. A woman in Chicago was seen holding up a sign of a German phrase which means “Work Sets You Free,” the same German phrase that the Nazis put on the gates of Auschwitz and other concentration camps. Yeah.

“This is truly dark and disturbing stuff. To call these protesters far-right may be an understatement.”

From Bellingcat, a warning that they also plan to collaborate with and infiltrate other protests:

“Open source materials suggest that, for now, the apocalyptic, anti-government politics of the ‘Boogaloo Bois’ are not monolithically racist/neo-Nazi. As we have observed, some members rail against police shootings of African Americans, and praise black nationalist self defense groups.

“But the materials also demonstrate that however irony-drenched it may appear to be, this is a movement actively preparing for armed confrontation with law enforcement, and anyone else who would restrict their expansive understanding of the right to bear arms. In a divided, destabilized post-coronavirus landscape, they could well contribute to widespread violence in the streets of American cities….”

And from Vice this week:

“For example, the so-called Boogaloo Bois — a group of armed anti-government extremists made visible by their Hawaiian shirts — have reportedly shown up to some of the protests.

The “boogaloo” is code for impending civil war or violent confrontation with law enforcement, and that’s what they’re hoping to get out of the protests. Their main reason for being there is their antipathy toward law enforcement, and so they’re trying to position themselves as allies of Black Lives Matter protesters. They’ve made police brutality one of their central issues, which was explored at length in a Bellingcat article this week.

As I finish this post on Saturday evening (May 30, 2020), I am watching Minneapolis on television and via Twitter. Tonight some group or groups of protesters insist they will continue protesting past curfew because protesting injustice is more important than following curfew. Other groups of people have organized together to defend their neighborhoods, pointing out that the police and firefighters offered no protection last night. Some individuals are armed and prepared to protect their businesses. Both reporters and residents point out some individuals, groups forming part of the protest march, and cars on the now-closed freeway are obviously from other states.

Minneapolis police have now arrived on the scene of the protest march, with officers from National Guard and State Patrol, and, without warning, started throwing tear gas and projectiles.

This is a sad and fearful night for all of us.

2 responses to “Who’s Rioting and Why”