Republicans can be expected to cut every corner when it comes to funding health and human services. This time around, they’re also using funny math to avoid responsibility for their cuts. END_OF_DOCUMENT_TOKEN_TO_BE_REPLACED

Legislating against agriculture and environment

According to Governor Mark Dayton, “Agriculture is not a partisan issue—all Minnesotans want a strong agricultural industry.” That’s far from evident in the agriculture omnibus bill that Republicans in the legislature sent to the governor –which he vetoed last week. Besides restricting spending for the Agriculture Growth, Research and Innovation (AGRI) program, the bill takes away the Department of Agriculture authority to enforce pesticide regulations. That puts Minnesota in conflict with the Federal Insecticide, Fungicide, and Rodenticide Act (FIFRA). END_OF_DOCUMENT_TOKEN_TO_BE_REPLACED

Republicans like law enforcement, right? You wouldn’t know it from the cuts and underfunding in the Judiciary and Public Safety omnibus bill. END_OF_DOCUMENT_TOKEN_TO_BE_REPLACED 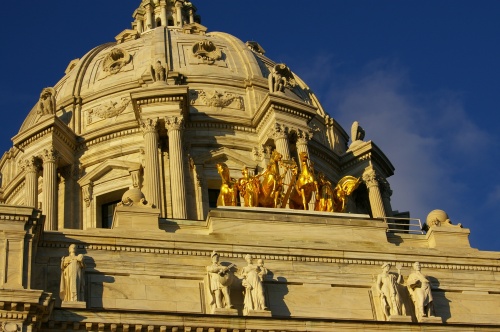 As the Minnesota legislature rolls on toward its May 22 end-of-session deadline, bad bills keep on coming. Here’s a quick list of some of the worst. Call your legislators, conference committee members, and Governor Dayton to just say no to bad environmental legislation, private prisons, and protest penalties.  END_OF_DOCUMENT_TOKEN_TO_BE_REPLACED

Four things you need to know about Minnesota’s special session

In the Minnesota special session, the legislature will decide on school funding (including teacher lay-offs and pre-K classes), water quality (including totally deregulating mining pollution and de-funding other anti-pollution measures), and whether to allow seed companies to tell lies on labels, among other issues. Anything there that interests you? If so, read on for a quick-and-easy guide to how the special session works, with more detailed articles linked at the end. END_OF_DOCUMENT_TOKEN_TO_BE_REPLACED