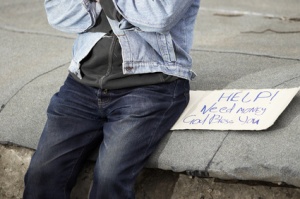 9.8% unemployment: By the numbers and beyond the numbers The national unemployment rate is up again, from 9.7 percent in August to 9.8 percent in September, with employers cutting an additional 263,000 jobs, according to the Department of Labor. Long-term unemployment numbers rose to 5.4 million, making up 35.6 percent of those who are unemployed. Although numbers tell an important part of the recession story, they can become both numbing and overwhelming. Robert Reich offers a description and explanation that go beyond the numbers, to the fear and discouragement that wear on most of us.

And for every person who shows up as unemployed in the Bureau of Labor Statistics’ household survey, you can bet there’s another either too discouraged to look for work or working part time who’d rather have a full-time job or else taking home less pay than before (I’m in the last category, now that the University of California has instituted pay cuts). And there’s yet another person who’s more fearful that he or she will be next to lose a job.

In other words, ten percent unemployment really means twenty percent underemployment or anxious employment. All of which translates directly into late payments on mortgages, credit cards, auto and student loans, and loss of health insurance. It also means sleeplessness for tens of millions of Americans. And, of course, fewer purchases (more on this in a moment).

Unemployment of this magnitude and duration also translates into ugly politics, because fear and anxiety are fertile grounds for demagogues weilding the politics of resentment against immigrants, blacks, the poor, government leaders, business leaders, Jews, and other easy targets. It’s already started. Next year is a mid-term election. Be prepared for worse.

In Minnesota, newly unemployed workers include 100 from Blue Cross Blue Shield. The Blues employ about 4,000 people in Minnesota and have laid off 300 so far this year, including this week’s 100, reports MPR. Blue Cross spokeswoman Pam Lux said the layoffs were due to flat enrollment and efforts to achieve greater efficiency.

Homeowners and renters are falling behind on their payments, reports MPR. According to the Minnesota Housing Partnership, “the percentage of homeowners behind on their mortgage payments continued to rise during the second quarter of the year, and 24 percent of renters were behind on their rent during the same period, up from 18 percent six months before.”

Delinquent homeowners are not alone. The American Bankers Association reports that, “Rising unemployment and falling incomes were the main culprits for the higher delinquency rates for bank cards, home equity loans and home equity lines of credit” in the second quarter of 2009, according to AP.

What’s to be done? Reich has an answer that makes sense to me:

Let me say this as clearly and forcefully as I can: The federal government should be spending even more than it already is on roads and bridges and schools and parks and everything else we need. It should make up for cutbacks at the state level, and then some. This is the only way to put Americans back to work. We did it during the Depression. It was called the WPA.

Keeping secrets in St. Paul Extreme Makeover: Home Edition is coming to the West Side, but nobody is revealing the exact location, including the Pioneer Press. The area to be closed off by the city includes five potential winners, so no family can be sure whether they have been selected.

On Friday, the television show will knock on one family’s door and tell them they have been selected to have their home torn down and rebuilt in a week. The city stalled on Pioneer Press requests for building permit records, and explained to the newspaper that the TV show might cancel if the location were revealed.

Dick Lippert, a DSI supervisor, said: “I can’t imagine why you would want to wreck this.”

The paper decided not to spoil the secret.

“For a long time after the elections, Kai denied that significant fraud had taken place, even going to the extreme of ordering U.N. staff not to discuss the matter,” Mr. Galbraith wrote in the letter, a copy of which was obtained by The New York Times.

“And, at critical stages in the process,” he wrote, “he blocked me and other U.N.A.M.A. professional staff from taking effective action that might have limited the fraud or enabled the Afghan electoral institutions to address it more effectively.” U.N.A.M.A. refers to the United Nations Assistance Mission in Afghanistan.

The Times said that the U.N. Secretary-General decided that the differences between Galbraith and Eide were too deep to allow them to work effectively together.

In other world and national news:

• President Obama met with General Stanley McChrystal in Denmark, where Obama had gone to lobby for Chicago to get the 2012 Olympic games;

• At least 20 people were killed and scores more wounded as al-Shabab took control of the port city of Kismayo from Hizbul-Islam, the other anti-government militia and its sometime ally in the war against the Somali government;

• Somalia’s president is visiting Minnesota this weekend, seeking support from the largest Somali community in the United States;

• Burma’s government denied an appeal from Aung San Suu Kyi against the detention order that will keep her under house arrest for another 18 months, past the next “election.”