ST. PAUL NOTES | Doing business along the trenches and behind the fences in St. Paul 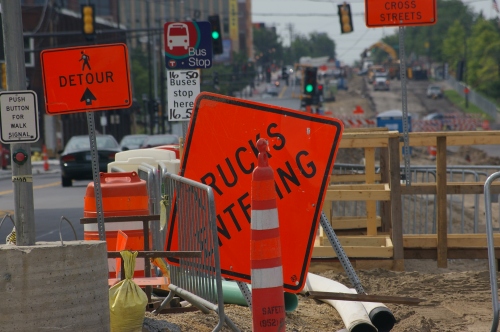 Doing business along the trenches and behind the fences of Central Corridor construction on University Avenue is tough enough. Dana Rose from Sharrett’s Liquors is one of the business owners who doesn’t think that getting the promised help for businesses should require a “13 page monstrosity” of an application, including personal financial data for the business owner (income, property owned, bank accounts, etc.) and authorization for a personal credit check.

Like other businesses along University Avenue, Sharrett’s is feeling the effects of Central Corridor construction. Parking places have gone away, the streets are torn up, traffic is sometimes backed up, but even when it’s not, customers are scared off by the prospect of dealing with construction.

Rose is a savvy business owner, who doesn’t sound like he would have much trouble filling out even a monstrosity of an application. But that’s not his point, exactly. “Lots of small business may not have the capacity to actually fill out this loan application,” Rose said, “and these are the people who desperately need mitigation.” 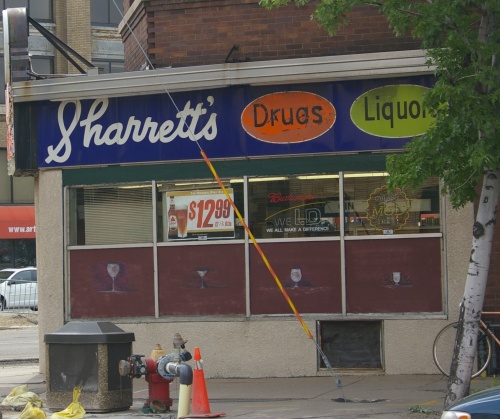 Sharrett’s Pharmacy and Liquor Store – in the family since 1949

Rose has been on University Avenue for a long time. His father, Ben Rose, owned Sharrett’s Pharmacy and Liquor Store since 1949. After Ben Rose retired in 1976, Dana Rose and his partner, Jim Forsland, took over the liquor store and dropped the pharmacy part of the business. In 1981, they bought Skol Liquor in Minneapolis, which had been operating “since the 1920s or 1930s.” The businesses now offer on-line shopping and delivery (“but only nearby”).

[Full disclosure: I live in the neighborhood, and highly recommend their selection of local beers, especially the Ringneck Braun Ale.]

No novice in the business world, Rose said the Central Corridor construction has not been well-thought-out. “They could have made the process just a whole lot easier,” he said, noting the failure to plan for parking or coordinate connections between businesses. He has worked directly with US Bank and Keys to arrange for some shared parking for customers. In meetings, when business owners asked for help with parking, he heard the response: “If we do that for you, we’d have to do it for everybody.” Well, said Rose, why not? What’s wrong with helping everybody?

Looking at the big picture, Rose said there should have been planning for park-and-ride lots or ramps. He notes that near the Ford Bridge, residents find commuters taking on-street parking during daytime hours, and he expects that will also happen once the Central Corridor is up and running.

What’s up with the Central Corridor business loans?

Brian Singer of the Neighborhood Development Center acknowledges that Rose (and other business owners) have a point. As of August 2, the requirement for turning in a personal financial statement has been modified – it still has to be turned in, but now the NDC will just look at it and give it back to the business owner. The reason for the change in policy is set out on page 9 of the application:

Once a project is approved by the HRA, all information except tax returns are considered to be part of the public record, according to the Data Practices Act, Minn. Stat. §13.62.

That means all of the business ownership information, number of employees and average wages paid, and complete statement of business indebtedness still will be public information. It’s not entirely clear whether the monthly income and loss statements for the preceding three years will be part of the public record, but that seems likely.

As of August 2, 116 people had attended the St. Paul information sessions required to begin the loan application process. (Minneapolis has a separate application process.) Of these, 21 had filed applications, with 15 of these “deemed complete” by NDC, and eight loans actually approved. The loans, said Singer, averaged about $10,000, and were based on the first months of construction.

At the August 2 session, attended by just two people, questions seemed urgent. “What if there is an emergency? What if the landlord is going to evict you, or if you can’t pay an employee?”

The loan fund totals about $4 million, with $2.945 million allocated to St. Paul and about $1.1 million to Minneapolis. Singer explained that the Corridor construction zone had been divided into one-mile segments, and each segment had been further divided into the north and south sides of the street. The available money has been designated for each segment, according to the number of probably-eligible businesses in that segment.

Four million dollars sounds like a good chunk of money. If businesses qualify for the maximum, however, that would cover only about 147 businesses in St. Paul and 55 in Minneapolis. That’s far less than the number of businesses affected by construction.

The loans are interest-free and “forgivable,” which means, according to the press release, that they will be “forgiven in equal installments over five years if the business can certify that it is operating on the Central Corridor each year.” So, if the business manages to stay afloat for five years, they won’t have to pay back the loan. Of course, if the business doesn’t make it through the construction period, then the owner is personally liable for paying back the loan.

This particular loan fund is being administered by the Neighborhood Development Center in St. Paul and by the Metropolitan Consortium of Community Developers in Minneapolis. For applications and more information, there are several more sessions scheduled at the Central Corridor Resource Center at 1080 University Avenue in Saint Paul. Or you can call and leave a message on their answering machine: 651-379-8118.