This land is your land, and this river is your river 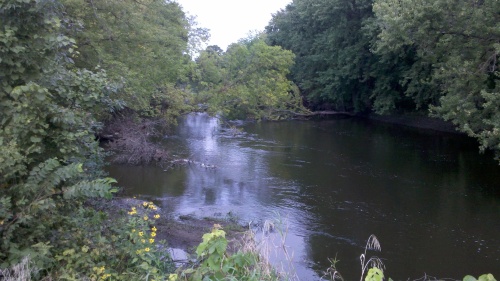 I grew up on the Crow River. I remember walking with Grandpa on the cow paths worn along the hillside above the river, and measuring flood or drought against the big rock at the end of the island. We found wild strawberries on those hillsides, and picked prickly gooseberries later in the summer. Mending pasture fences, I watched the bluebirds nest each year in an old, gray wooden fencepost.

In 1976, our Meeker County part of the Crow River was added to Minnesota’s Wild and Scenic Rivers list, along with parts of the Mississippi, Kettle, Rum, Minnesota and Cannon rivers. Now an oil pipeline crosses the wild and scenic Crow River, and this year the pipeline company proposes to double the amount of oil that the pipeline carries.

Courtesy of Koch Brothers’ Minnesota Pipeline Company, the 24-inch pipeline snaked across Meeker County and under the Crow River in 2008. Line No. 4 runs for 295 miles, through rich farmland in 15 Minnesota counties, crossing “64 perennial streams and 119 intermittent streams” along the way. The pipeline brings Canadian oil to three refineries near the Twin Cities.

The Litchfield Independent Review reported on a February public meeting about the proposed increase in capacity and the six new pumping stations. Eden Valley mayor Brent Bengtson “asked how increasing the pipeline’s capacity would affect the integrity of the pipeline itself,” but also said that he “felt satisfied that the company would take adequate safety measures and had a plan in place for inspections and maintenance.”

In January, the Minnesota Department of Public Safety issued a report on oil and railroads and pipelines, titled Minnesota’s Preparedness for an Oil Transportation Incident. The report noted that

“Rail accidents tend to garner more attention than pipeline accidents simply because they are generally much more visually apparent. Pipeline accidents can involve leaks and spills that go undetected for long periods of time, and they often occur in remote areas.”

Sometimes concern about oil train explosions is used to advocate for pipelines. But pipeline accidents can also be serious, notes the report:

“Pipeline accidents frequently involve environmental damage that do not cause obvious immediate death, injury, or destruction, but can be severe and even catastrophic. Recent examples of such occurrences include a pipeline rupture in Marshall, Michigan that leaked oil into the Talmadge Creek and Kalamazoo River. NTSB states that the cleanup from this release is on-going, requiring $760 million in cleanup costs to date, and that about 320 people in the area have reported crude oil exposure-related symptoms.”

Whatever the dangers of oil pipeline leaks may be, they are not the only, or even the most present, danger to the Crow River.

Like many Minnesota lakes and streams, by the time the North Fork of the Crow River merges with the South Fork, “the river is impaired for both aquatic life and aquatic recreation uses,” according to the 2011 report of the Minnesota Pollution Control Agency. The MPCA North Fork Crow River Watershed Monitoring and Assessment Report found that,

“The North Fork Crow River Watershed has some widespread problems throughout the entire watershed. Many of the tributaries to the North Fork Crow are channelized through agricultural land. Three reoccurring water chemistry problems within the watershed are high nitrate levels, high nutrient levels, and low dissolved oxygen levels. Turbidity becomes more and more prevalent as you go further downstream in the watershed.”

As is the case for most of Minnesota’s “impaired” lakes and streams, the greatest damage comes from non-point pollution. A sewage plant or a pipeline leak would be a specific point of pollution. Non-point pollution travels invisibly in rainwater and snowmelt, coming from a variety of human activities, including urban run-off, farm fields, livestock waste, and riverbank erosion.

Back in the 1970s, I heard Pete Seeger singing about rivers, and especially about his love for the Hudson River near his home. For decades, he fought tirelessly to clean up the Hudson. Back then, I thought our Crow River was less vulnerable than New York’s Hudson River. Now I know better.

In 1996, big turkey barns were built less than a thousand feet from the Crow River. More than a hundred local residents and landowners protested, believing that processing half a million turkeys a year through those barns would endanger the wild and scenic river directly downhill from them. The turkey growers promised to build carefully and move a gravel road and said that the no run-off from manure or dead turkeys would ever reach the river.

I can see the feathers collecting along the shoulders of Highway 24 when trucks haul loads of live turkeys to slaughter. I can’t see whether or how much the turkeys contribute to non-point pollution flowing in rainwater and snowmelt into the Crow River.

A pipeline or a turkey farm makes danger visible. Bigger, ongoing damage comes from multiple, far less visible sources. We can’t see how much each specific field or drainage ditch contributes to the non-point pollution that endangers our rivers and waterways.

Michelle Nijhuis wrote last year about growing up as a kid in the Hudson River Valley, when Pete Seeger was fighting the battles that eventually won passage of federal Clean Water Act in 1972. She wrote about Pete’s battle:

“The river was dirty, and now it’s cleaner. What’s wrong is being righted. What’s impossible is possible.”

Pete called the Hudson “halfway clean” and never stopped speaking and fighting for its health. In the end, the health of the rivers and lakes and land is our health. And, as Nijhuis wrote in her tribute to Seeger, “What’s impossible is possible. And the work is never done.”

One response to “This land is your land, and this river is your river”