Tax Day – Who pays, who plays

Plenty of other people have complaints. Conservatives, in particular, complain about big government and what a heavy burden taxation is for the wealthy. They invariably point out that the rich pay more taxes. Why, the top one percent pays almost a quarter of all taxes!

That makes sense. The top one percent also takes home almost a quarter of all income. People who make more money, pay more taxes. That’s a feature, not a bug in the tax system.

I’m not saying the tax system is perfectly fair. I think the tax rate on the highest incomes should be even higher, the system should be less complex, loopholes should be closed, and so on. But the tax system as it’s set up now does not unfairly burden the rich. Quite the contrary. Here’s how it works.

The 20 percent of Americans with the lowest incomes average $15,000 per year. Do they pay taxes? You bet they do! Although they earn only 3.2 percent of the nation’s income, they pay two percent of total taxes. Note: That’s not the same as income taxes. We pay lots of different kinds of taxes, including social security taxes, sales taxes, gas taxes, and on and on. (If you want an analysis of Minnesota’s state and local taxes, you can find it at the Institute on Taxation and Economic Policy.)

So what about the millionaires and billionaires? The top one percent has an average income of $1,735,000. That one percent gets 22.2 percent of all the income earned in the United States. They pay 23.8 percent of total taxes. They pay a higher income tax rate than lower-income brackets, but a lower percentage of their income in social security taxes and many other taxes.

Are all those numbers making your head spin? These two neat graphics from the Institute for Tax Justice help make the numbers clearer. 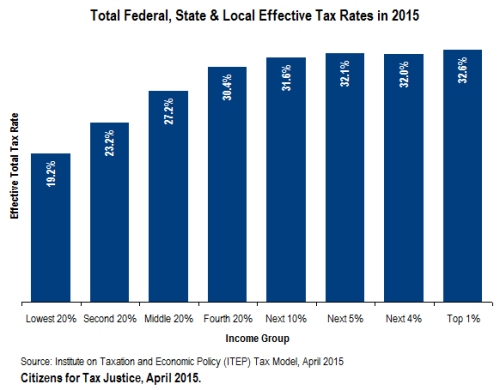 Now, here’s where it gets interesting. 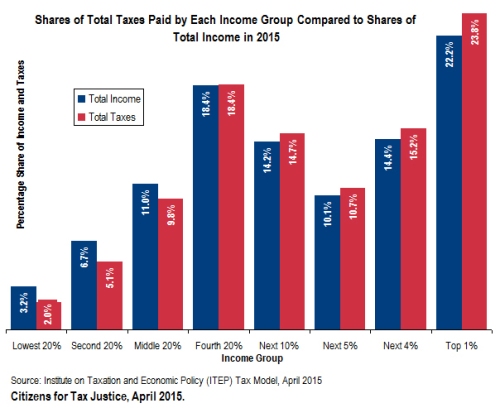 The top federal income tax rate is 39.6 percent this year. That rate applies only to high-income earners, and only to that part of their income that exceeds $400,000 for an individual return.

That does NOT mean that top-bracket taxpayers will pay a 39.6 percent tax on all of their income. The rate is a marginal rate.

One of the common misconceptions about taxes has to do with marginal tax rates. Let’s say Terry Taxpayer earns $36,901, which puts her in the 25 percent tax bracket. How much tax does she have to pay?

If you said $9,225, you understand math but not tax rates. Here’s how it really works.

Terry will pay a ten percent tax on the first $9,075 of taxable income. That’s $908 at the ten percent bracket.

How much is too much tax for top incomes?

The higher rates of the last century did not hurt the economy or the one percent. I’m not advocating a 90 percent marginal tax rate, but I think a higher top-bracket tax would be a good idea — and just one of many reforms that we ought to make in the tax code.