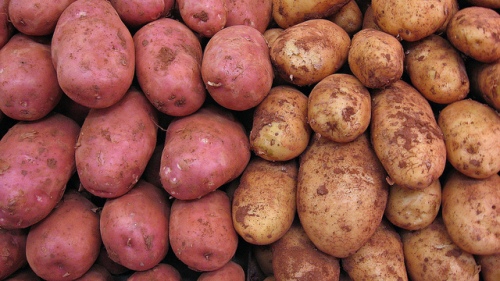 Sebeka, Minnesota vegetable farmer Kathy Connell went to McDonald’s last week — not the restaurant, but the annual shareholder meeting. She had a message about pine forests, potatoes and Minnesota water, but McDonald’s shut her out. Connell, along with other Minnesotans and the Minnesota Department of Natural Resources, is concerned about R.D. Offutt Company’s use and misuse of land and water in northwestern Minnesota’s Cass, Hubbard, Becker and Wadena counties, part of the Pineland Sands Aquifer. Writing about her trip in Alternet, Connell said:

“The most significant aspect of this environment is that sand drains very quickly. That means we are never more than three dry days away from a drought. It also means that anything water soluble — including pesticides — will be quickly washed down through the sand into the groundwater below. That’s the water most of the community drink from their home wells.”

Offutt, which contracts to supply potatoes to McDonalds, is clearing thousands of acres of pine forests, sinking dozens of wells, and applying large amounts of fertilizer and pesticides. The DNR estimates that up to 27,000 acres of pine forests either have been cleared or are at risk of being clearcut, a “rate of forest loss in this region [that] has not been seen in recent memory.” The DNR in February told Offutt to complete an Environmental Assessment Worksheet before it would approve any additional irrigation wells, citing “a risk of nitrate contamination to groundwater and surface water” that “could impact drinking water resources, fish and aquatic species.” Offutt already has permits for 32 wells, and is asking for more than 50 additional wells.

The EAW could take up to a year to complete. During that time, no additional irrigation wells will be permitted. That doesn’t affect the 32 wells already permitted, or the thousands of acres already being planted to potatoes, fertilized and sprayed with pesticides.

“Both discussed the background of pesticide spraying and usage in the areas surrounding Park Rapids, and also the goals the new Toxic Taters Coalition would like to achieve.

“’Since 2006, using our drift-catching technology, we have been able to document pesticide drift in potato-producing regions of Minnesota. Through the monitoring of air samples, this group has documented pesticides drifting onto surrounding farms, schools and houses on an alarmingly consistent basis. During the first three years of air monitoring, pesticides were detected in more than 66 percent of the samples taken,’ Wells said.”

Back in 2013, the Star Tribune quoted a letter from State Representative Jean Wagenius to McDonalds, which said that, “[This] method of growing potatoes … cannot avoid contaminating the groundwater or wasting natural resources on this particular converted forest land.”

McDonalds’ fries are cheap. They are cheap because a big part of the true cost is externalized. Clearing the pine forests and planting potatoes puts pesticides in the air and nitrates in the water. Excessive irrigation draws down aquifers, while row-cropping on sandy soil increases erosion. The potato growers and McDonalds and the people who buy their fries are paying only a small part of the cost of production — the rest of the cost, the cost to our common air, soil and water, is not included. That cost is paid by the people who breathe the air and drink the water, and by future generations who face depleted aquifers and degraded land. Those cheap fries end up costing a lot.

One response to “Cheap fries, high costs to Minnesota land and water”