Saving the Mississippi — and your drinking water 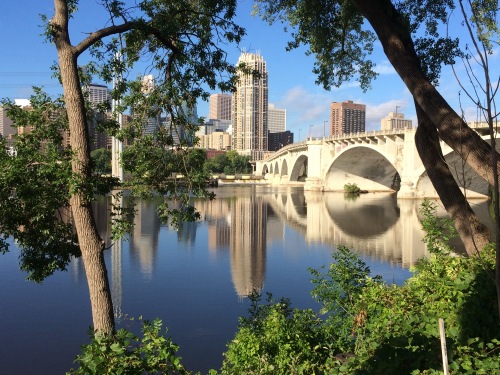 The Mississippi River, source of drinking water for 15 million people including millions in the Twin Cities, is being steadily polluted from its source in northern Minnesota and all along its course through the state. In a powerful series in the Star Tribune, Josephine Marcotty pulls together the evidence of danger to the upper Mississippi in northern Minnesota, along with stories of the Red River and Chippewa River.  In the first article in the three-part series, Marcotty writes:

“In the last five years, the Upper Mississippi watershed has lost about 400 square miles of forests, marshes and grasslands — natural features that cleanse and refresh its water — to agriculture and urban development. That’s an area bigger than Voyageurs National Park and represents the second fastest rate of land conversion in the country, according to one national study.

“That breathtaking transformation is now endangering the cleanest stretch of America’s greatest river with farm chemicals, depleted groundwater and urban runoff. At this rate, conservationists warn, the Upper Mississippi — a recreational jewel and the source of drinking water for millions of Minnesotans — could become just another polluted river.”

Aquifers are underground layers of rock and sand that hold water. That’s also called groundwater: the water that is held beneath the ground. Together with streams, rivers, lakes, and wetlands, aquifers make up watersheds. The Watershed Atlas defines and illustrates watersheds:

“A watershed is a basin-like landform defined by highpoints and ridgelines that descend into lower elevations and stream valleys. A watershed carries water “shed” from the land after rain falls and snow melts. Drop by drop, water is channeled into soils, groundwaters, creeks, and streams, making its way to larger rivers and eventually the sea.”

More than a river, the Mississippi is an integral part of the entire country’s water system, fed by other rivers and streams as it flows and grows for 2,300 miles south to the Gulf of Mexico, draining a land area larger than Europe. The Strib series interactive graphics show this area, and much more.

Stresses on the cleaner northern part of the Mississippi add to the contamination it carries couth of the Twin Cities, fed by nitrogen and topsoil run-off, especially from large-scale production of corn. Runoff from cities, lawns and golf courses also contributes to the pollution of the Mississippi and, ultimately, to the growing dead zone in the Gulf of Mexico.

Defenders of industrial agriculture, whether in the form of potatoes or corn, say that irrigation and fertilizers can turn sandy, unproductive land into profitable farms. That profit comes with a high cost. In northwestern Minnesota:

“Nitrate contamination of local drinking water has climbed in lockstep. The city of Park Rapids had to dig deeper wells at a cost of $3 million, and in some areas above the aquifer more than 10 percent of private drinking wells have nitrate concentrations above the level considered safe for infants and pregnant women.”

Additional pressure comes from paving land, which increases run-off, which is exponentially worsened by storms and heavy rainfall. Paving comes as more of us baby boomers build or expand lake homes, which also leads to more road paving and expansion of nearby cities. That means “more roofs, lawns, docks, driveways and boats — all of which can drive water pollution.”

“Changing farming practices on just an additional 10 percent of the Chippewa River watershed’s sensitive agricultural land can be enough to meaningfully improve the safety of the water, reduce flood potential, restore wildlife habitat, and stimulate a thriving local and regional foods economy.”

As a partner in the project, the Land Stewardship Project focuses on helping farmers make the change profitable. They’ve developed a computer program that can help farmers tell what different crop rotations will cost and what revenue they will generate, taking into account costs from tractor fuel to farm rent.

Participating farmer Dan Jenniges told the Star Tribune that he doesn’t get too excited about changing his farming practices just for the sake of water quality, butterflies and birds, but he’s found the changes are good for his bottom line. That’s a message the Land Stewardship folks are working on communicating:

“’We’ve been fighting against some huge tides,’ said Robin Moore, project coordinator for the Minnesota Land Stewardship Project, one of the lead conservation groups. ‘All that money people were making from high [priced] beans and corn. That was hard.’