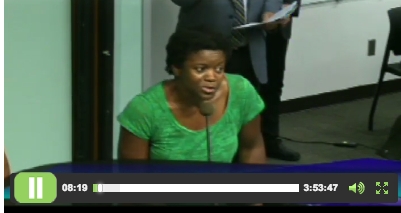 Parent speaking during public comment time at August 18 board meeting.

“It’s about credibility and trust,” according to Jon Schumacher, who said the message that’s sent when everything isn’t made public works against what people in the district want to be able to do. Schumacher, a candidate for the school board, said, “This is a time that it’s critical to reconnect with our school community.”

Board member Anne Carroll said that the public comment in board meetings gets undue attention. “What happens in that 30 minutes with two or zero or five people gets a huge amount of play in the press,” without press attention to comments made to board members on the street or by emails or in other settings. She said that shutting off the television cameras would make the entire process of public input to the board, “substantially more transparent, substantially more accurate in terms of reflecting the plethora of public comments that we get.”

So — shutting off the cameras somehow gives community members a greater voice? Unsurprisingly, many disagree.

John Brodrick, the only board member to vote against the move, praised the in-person public comment time, noting that over the years the board has “welcomed a diverse set of speakers,” and that this is “part of the personality of the school district.” Sometimes, he said, that results in “a certain degree of levity or humor or even outrageousness, but you know what — that’s democracy at work!”

A long Facebook discussion thread pointed out that many people can’t get to the board meetings and rely on cable broadcast or on the videos archived on the board’s website to find out what is going on. And what is going on in the public comment section?

I asked Joe Nathan about valuable public comments he has heard over the years, and he gave examples of high school students explaining the value of dual credit courses, elementary students recounting their experiences of mainstreaming, and students from AGAPE and Gordon Parks speaking to the board. “These are students who sometimes are viewed as problems,” Nathan told me, but “presenting at the board and hearing from family and friends that they had seen them on cable TV” made a difference for these students.

On Tuesday, commenters included a parent from the L’Etoile du Nord, the district’s French immersion school, who told the board that, “after the school year ended, parents learned without any communication that instrumental program would be drastically modified.” She told the board that many parents chose the school because of the strong instrumental music program, and that they were “quite surprised that we were not informed.” Her comments reflected frustration with the district’s lack of communication, as well as concern over her school’s falling test scores and enrollment. “You should hear from parents,” she told the board.

The board will continue to hear from parents, but they just made it harder for parents and students and community members to hear from each other. Cutting off the cameras during public comment is one more misstep for a board and district where communication, transparency and respect remain big issues.

2 responses to “St. Paul school board turns off television coverage of public comments”