Bees win some, lose some in Minneapolis 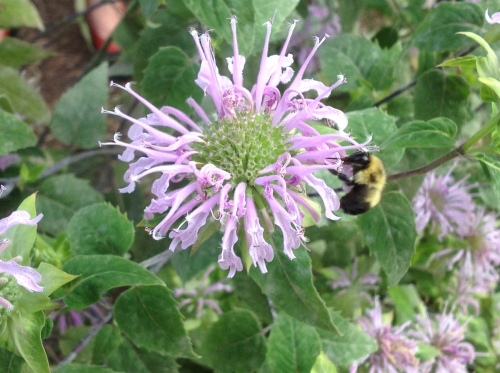 A resolution supporting bees buzzed through the Minneapolis City Council last week, with the city’s press release touting it as “significant action in the fight to protect the sharply declining local bee population.” Recognizing the problem and pledging to plant more pollinator forage are good steps, but the month’s news reveals the complexity of getting city government to move in a single direction. The city council’s bee-friendly resolution did not (and cannot) actually ban any specific pesticides, and doesn’t affect the Minneapolis Park and Recreation Board, or other government bodies, such as the Minnehaha Creek Watershed District.

In August, E-Democracy forum members excoriated the MPRB for using glyphosate on invasive narrow-leaved cattails in Loring Park and at Coldwater Springs and in some other places, and brought a passionate response from MPRB Commissioner Annie Young, who said she is considering resigning because, “I have fought for 25 years for the reduction of the use of chemicals in the parks and for years thought we had actually quit using Round Up so this latest scene and actions have made me sick – just plain sick.”

“MPRB staff admit that pesticides should not have been used by the contractor planting trees and shrubs as part of the current restoration of Bossen Lane in the Roberts Bird Sanctuary. Hopefully in the future, MPRB Commissioners will help staff realize that ‘common practices for commercial landscaping’ do not apply in a bird sanctuary and wildlife habitat.

“I continue to see troubling evidence of pesticide use in fragile parklands and natural areas, where such use should be prohibited.

“For example, the turf around the Calhoun wetlands (and perhaps the Cedar Lake wetlands) is routinely sprayed and warning signs are placed right next to the ‘Shoreland Habitat Restoration Project’ signs! A staff member at the Minnehaha Creek Watershed District told me that MCWD only manages the native plantings there, not the turf–so it seems MPRB allows the use of pesticides in this fragile area where wildlife habitat is being restored. … It’s heartbreaking because I have actually watched a turtle dig a hole and leave her eggs in the very spot where the pesticides are applied.”

The plight of pollinators, including honey bees, is well-documented, and every action that recognizes the danger of pesticides and of habitat degradation helps. The city council resolution calls for “all Minneapolis property owners, residents, businesses, institutions and neighborhoods to become more pollinator friendly.” Unfortunately, the real kicker may be the final paragraph of the city press release, which notes:

“The State of Minnesota prevents local governments from regulating any matters concerning pesticides. The City of Minneapolis will continue to advocate at the State and federal level for increased authority to address the non-agricultural use of pesticides, and for other pollinator-friendly policies.”

The state and federal levels of government continue massive failure in protecting pollinators and people from all-too-profitable poisons. The latest article from Rolling Stone, What is killing America’s bees and what does it mean for us? reveals the total inadequacy of the regulatory process:

In 1972, revisions to the Federal Insecticide, Fungicide and Rodenticide Act placed the responsibility on manufacturers to provide the safety data for the products they make, the idea being that American taxpayers should not cover the bill for tests done to products that financially benefit private companies. In practice, what this means is that the studies provided to the EPA when a product is up for approval are, by law, generated and submitted by the manufacturer of that product. …

Also of concern then is the fact that agrochemical companies are not only responsible for reporting how much environmental exposure a pesticide might have, they’re likewise responsible for submitting to the EPA’s review the lethal dose for non-target organisms — what amount it would take to kill 50 percent of a population. ‘It’s the fox guarding the henhouse,’ says Ramon Seidler, a former senior research scientist in charge of the GMO Biosafety Research Program at the EPA. ‘And the fox is the one collecting the eggs and bringing them to the regulators.'”

Seidler’s solution? “Go after Congress.” He says that the EPA not only has no mandate or resources to do its own testing, but is inadequately funded to even keep up with scientific studies and evidence produced by others.
Going after Congress is one step, and going after the Minnesota legislature, which laughed off pollinator protection in the last session is another. The Minneapolis city council resolution is a public commitment to move in the right direction. The MPRB responses show that they are also listening, even if not moving as far or as fast as many demand. Besides continuing to learn more (see list below), and keeping the pressure on elected officials, we can act in our own gardens and back yards and boulevards, along the lines recommended by the Minneapolis City Council:

For more information on pollinators and pesticides and people’s health: