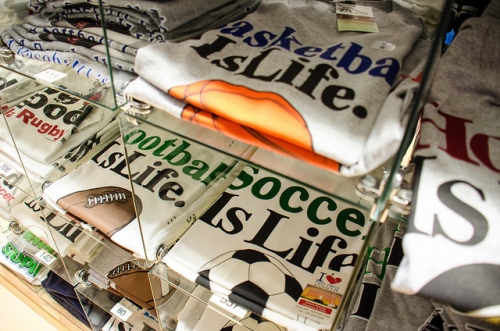 On Wednesday, August 26, the St. Paul City Council will vote on a resolution “Supporting Major League Soccer in the City of Saint Paul.” Major League Soccer thinks Minnesota is ready for the big time. Or maybe MLS thinks the Twin Cities are fat pigeons, ready for plucking, since we have already subsidized stadiums for other sports millionaires. MLS and the Minnesota United owners’ group led by Bill McGuire want public subsidies. While Minneapolis has said no, St. Paul Mayor Chris Coleman wants the stadium and Hennepin County Commissioners are pushing for a Minneapolis deal. We’ll see how the St. Paul city council votes.

Pros and cons of a St. Paul soccer stadium

St. Paul has a 10-acre site for the stadium, the Midway MTC bus barn site, which is already off the property tax rolls. Of course, MLS wants more than a property tax break, and the rest of the deal, however it shakes out, would cost taxpayer dollars.

St. Paul stadium advocates point out that at least a stadium located at Snelling and I-94 would put something attractive on the godawful ugly bus garage site, and that the stadium would be a Green Line destination, bringing thousands of fans to eat and drink along University Avenue. Steven Clift writes on E-Democracy:

“From a purely soccer fan perspective, jumping on the new A line from my house would make this easy peasy and the area has lots of authentically interesting ethnic restaurants rather than going so upscale as to feel too trendy like the other stadiums.”

“’I got to sit out here last night on a beautiful August night as the Saints broke their single-season attendance record and watched those crowds pour out into this neighborhood, get on the light rail line afterwards, and just create a vitality that is shocking and wonderful to see,’ he said. ‘We need to have that same type of investment in the Midway area, so I am very excited and very hopeful that we can get this project done.’”

Soccer is a sport with wide international appeal, which brings a certain cachet and might be more attractive to the Twin Cities’ immigrant populations than the whiter sports of baseball, football and hockey. Nice idea, but Tom Goldstein, also writing on E-Democracy, points out a problem

“We have no demographic info. on where Minnesota United draws its crowds. Every photo I’ve seen of crowds at their games seems to suggest that it is primarily a white fan base–at least in terms of who buys tickets. I’m going to go out on a limb here, but I’ll bet that means the team draws largely from the western part of the metro–Edina, Minnetonka, Blaine, Wayzata, Eden Prairie, etc.–and not from St. Paul. Unless there’s data that shows otherwise, that doesn’t make St. Paul the ideal location for the stadium.”

As for the “development” argument in favor of a stadium, that’s controversial, too. Goldstein again:

“Stadiums don’t spin-off development, no matter what civic or business leaders want us to believe. In many cases–the Metrodome, etc.–they actually discourage development. …

“Whether people want to believe it or not, McGuire and partners are not interested in building a stadium out of the goodness of their hearts. Nor are they looking to spur economic development in the Midway or benefit nearby ethnic restaurants. What they do want is to create a destination venue in which they could capture the lion’s share of the revenue–either by getting free land, a free stadium, or some kind of really generous development rights. But that would require buying out a going concern–Midway Center–which is profitable in spite of the retail tenant mix and not looking to sell.”

“People have been talking about remaking Midway Center for a long time. The Bus Barn site and surrounding lots have only lured big box retailers over the years. If a soccer stadium were built there, I see no reason to believe it wouldn’t spur millions of dollars in investment. Whether that means profits for greedy developers, so what. It’s a crime now to make a buck in the US? “

As far as the bus barn site, Buscher says:

“A MLS stadium isn’t my first choice for the site. But let’s face facts. RK Midway isn’t going to redevelop the area on its own. It’s going to want millions in subsidies to build out the roads and new infrastructure. It’s talked about redeveloping the former bank building and Big Top locations before. But they’ve done nothing. This area isn’t Uptown. It’s not flashy. It has no Greenway. It’s not going to be transformed just cause we want it to.”

“Smart development comes from planning and input, not plopping a stadium on the site because it’s an open parcel that looks like crap. That’s not pragmatism at work.”

If McGuire & Co. want to spend their own money, Goldstein says, that’s fine, but “it’s time for cities to stop subsidizing other people’s wealth based on bogus economic claims.”

Jan Carr posted links to an already-completed report on most desirable plans for the Midway “super-block” bounded by Snelling, University, Pascal and I-94 — which do not include a stadium. The March 25 Powerpoint presentation to the Metropolitan Council included this very attractive map of proposed development: 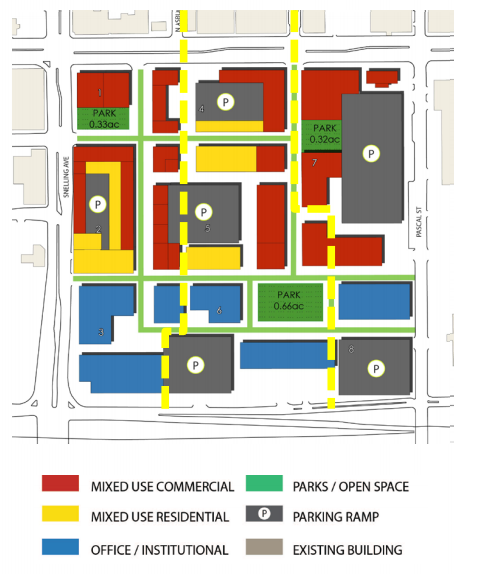 Unfortunately, the next slide included the warning that, “There is a large gap between the cost of the infrastructure needed and what the market will support.”

All of which leaves the big question: Should St. Paul try for a soccer stadium, or subsidize RK Midway’s redevelopment, or just let the Superblock sit there, ugly as sin but at least not costing more taxpayer dollars?