Act now to save the next child 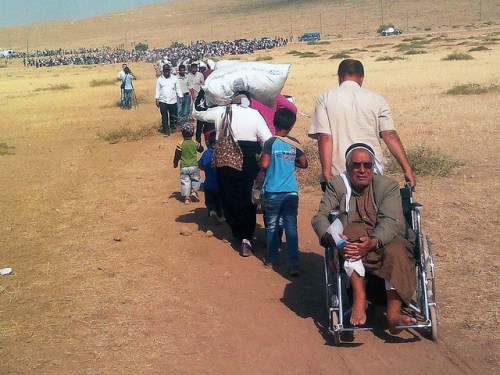 Abdullah Kurdi, father of the toddler whose body washed up on a Turkish beach, spoke to Reuters as the bodies of his wife and two young sons lay in a Turkish morgue:

“The things that happened to us here, in the country where we took refuge to escape war in our homeland, we want the whole world to see this,” he said.

“We want the world’s attention on us, so they can prevent the same from happening to others. Let this be the last.”

We can take concrete actions, tonight, tomorrow, the next day to save the next child. Actions carry no guarantees of success, but inaction ensures failure.

The United States has accepted only 1,434 Syrian refugees during the past four years. That’s less than 400 refugees per year. That’s less than the number of refugees who have drowned in the Mediterranean this year alone. The Advocates for Human Rights blog issued an urgent appeal today:

“You and I must hold our respective governments accountable. We must confront the consequences of the world’s collective failure to help migrants escaping violence in search hope and safety. We must pressure our governments to turn toward, not away from, refugees.

We have the capacity to handle hundreds of thousands of refugees As Amanda Taub writes in Vox:

“This country already has a large, expertly staffed refugee resettlement program that could handle the logistics of resettling Syrians, and a host of private charities that are experienced in helping refugees settle and integrate into communities across the country that could assist them when they arrive. We are the richest country on Earth, and opening our borders to more immigration would help this country to grow even richer. There is no serious argument against taking in more people.”

Addresses for President Barack Obama, Governor Mark Dayton, Senators Al Franken and Amy Klobuchar, and Minnesota’s congressional delegation are at the bottom of this post. (I sent short messages, also reprinted below — feel free to copy or adapt the language.)

Iceland has a total population of 330,000, less than the population of either Minneapolis or St. Paul. When Iceland’s government said it would accept 50 Syrian refugees, citizens reacted with outrage and generosity, with 10,000+ individual offers of help and support pouring in to a Facebook page. Individuals offered everything from extra rooms in their homes to warm clothing and tutoring.

Learn about the story behind the headlines. I’ve written a lot more about the refugee crisis, and each of these articles has links to many others:

Other recent articles include:

Horrendous as the plight of Syrian refugees is, they are not alone. Refugees continue to move across the world. As the Advocates for Human Rights blog points out:

“Thousands of children and families continue to arrive at the United States-Mexico border, fleeing horrendous violence in Central America. Many remain locked up in United States detention centers.

“In the United States, Central American refugees are met by a ruthless immigration system that jails them, denies their due process rights, mistreats the vulnerable, and fails to abide by international human rights standards.”

It’s hard not to feel overwhelmed — but if you are reading this, you are in a position to act now. You have a computer and you can start by sending a message to our government today.

My letter to the President, Senators, and my Congressional Representative:

Syrian refugees need our help. This is an international emergency, with refugees dying in the attempt to escape every day.

We failed Jewish refugees on the SS St. Louis in 1939. We are failing Syrian refugees today. Germany is admitting hundreds of thousands of refugees. The United States can and should do the same. Even without the prolonged and complicated applications for refugee status, the Department of Homeland Security could order Temporary Protected Status for Syrian refugee applicants.

It is long past time to act. Please move quickly and decisively to offer shelter and protection to Syrian refugees.

My letter to Governor Dayton:

Syrian refugees need our help. The current refugee quota is far too low. This is an international emergency, with refugees dying in the attempt to escape every day.

Minnesota has excellent refugee resettlement programs. We have a strong economy and should welcome refugees. Please use your influence to urge admission of an increased number of refugees this year and next year. Please tell the president that we in Minnesota can welcome and resettle thousands of refugees right here, right now — far more than the paltry number of 1,434 Syrian refugees resettled nationwide over the past four years.

It is long past time to act. Please move quickly and decisively to offer shelter and protection to Syrian refugees.

One response to “Act now to save the next child”