Why you should read Sarah Lahm on Reading Horizons

Page from one of the now-withdrawn Reading Horizons “Little Books” –

Sarah Lahm started telling the story in August: A corporate contractor got more than a million dollars from Minneapolis Public Schools and delivered offensive teacher training and racist books. Nine or ten blog posts later, the story continues to grow and now the Washington Post has picked it up, crediting Lahm for her investigative reporting, which uncovered the scandal.

I’ve posted Lahm’s ongoing exposé on Facebook and talked to friends about the articles. I considered not writing anything in this blog, because you really should read all of the articles on Sarah Lahm’s blog and also contribute to support her reporting. (I have. There’s a link at the bottom of her blog page.) But — I know that some people who read News Day still haven’t discovered Bright Lights, Small City, and I know that time constraints may keep others from finishing the series, so here’s a shorter introduction, with links to and quotes from, several of the articles..

[The trainer] “introduced herself by saying she was from Kansas City, but lived in the suburbs. She said she didn’t go downtown because, ‘Frankly, it’s scary.’”

[The trainer] then kept referring to ‘poverty schools,’ and how people should not work in them for more than five years. [She] told the teachers before her that she herself had made the mistake of working in a ‘poverty school’ for seven years, at which point her ’empathy went down.’”

Cashing in on the “achievement gap”: Reading Horizons contract with Minneapolis reportedly worth $1.2 million

Reading Horizons is promising to “narrow” the “achievement gap” between white students and students of color–with the help of “Little Reader” books that have struck teachers and the general public as incredibly racist, sexist, and oppressive. …

[District Communications Director Gale] Plewacki downplayed the books, and said a team that included up to 60 teachers had selected Reading Horizons because they are “known for their accomplishments in literacy.” 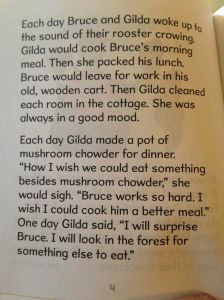 Minneapolis teacher: It is “misinformation” that Reading Horizons was recommended by all

From the teacher’s letter to Sarah Lahm:

I am one of the 60 or so teachers that were on the review committee. It is misinformation that all 60 or so of us recommended Reading Horizons as our pick for foundations/phonics program. Here’s the reality: We were able to pick from a total of 5 programs, 3 of which were “online only” programs that would require our K, 1st, and 2nd graders to sit in front of a computer or use an Ipad daily. Those three did not seem to be best practice for our youngest students.

The remaining two programs (Mondo Bookshop and Reading Horizons) were the only ones that could be taught without daily computer or tablet use. At the table I was at ( with 8-10 K and 1st grade teachers) we overwhelmingly preferred Mondo Bookshop (currently in use in St. Paul Public Schools).

Reading Horizons: A curriculum “even a janitor” could teach

“The company’s ‘Implementation Coach’ kept emphasizing how scripted their curriculum is, saying things like, ‘isn’t it so great? It’s so scripted even a janitor could use it!”

Berger, too, found the scripted nature of Reading Horizons’ work “a little excessive.” It’s built around a carefully sequenced method of teaching, where students would be given concrete lessons in decoding and reading, and then be given a “Little Book” to read that would match their own reading level.

And those reading levels are to be determined by a computerized diagnostic test for the 5, 6, and 7 year olds in the district. …

“If the KKK had a great literature program, would we buy it?” Reynolds wondered, calling the whole episode part of a bigger issue: “If we continue to pay a company with these skills, we are condoning this.”

Instead of purchasing million-plus-dollar outside curriculum that deeply compromises any commitment to equity we should collaborate with our local and school communities’ rich knowledge to create powerful, local, and culturally relevant curriculum. Consider the Network for the Development of Children of African Descent (an archive of culturally appropriate books for children of African descent), Birchbark Books (an extensive collection of indigenous children’s literature), Ancestry Books (a collection of literature written by authors of color and Indigenous authors to reflect their communities and children with respect), and many more.

For the sake of our students, community, and future we must refuse a Reading Horizons “redesign” altogether. Furthermore we find it to be poor logic that investment in short-term out-of-state corporate solutions is better than continual investments in our staff, and the collective empowerment of students, families, educators, and communities. Teaching phonics can be integrated into the teaching of compelling and empowering literature that reflects the diversity of our scholars, and the world. Training and investment in such literature is what an equity-centered district should do.

Reading Horizons story picked up by Utah newspaper: “Lazy Lucy” is not new to MPS

During the  school board meeting, board members grappled with whether or not to cut ties with Reading Horizons, now or in the near future, and risk losing the $1.2 million dollars already sent to the company. At the board meeting, interim superintendent Michael Goar admitted this contract with the Utah-based provider of reading curriculum and software had been “rushed”, and referred to it as “not a standard contract.” …

And now, the district is, essentially, paying Reading Horizons to learn how to be more “culturally competent.”

MPS withdrew the books and sent them back to Reading Horizons. But instead of canceling the contract, MPS is asking Reading Horizons to rewrite the books, or write new ones that are less offensive and less racist. Which sounds crazy to me — why would you ask a company that has produced and sold these racist materials to rewrite them, instead of dumping that company and going with a culturally competent alternative?

According to the Star Tribune:

“Board Member Don Samuels said the company deserves another chance. If a community can forgive a white supremacist for killing black people in a South Carolina church, the district can give Reading Horizons another chance, he said.”

Back to Sarah Lahm’s blog post about the school board meeting:

Board members Siad Ali, Rebecca Gagnon, Kim Ellison, and Nelson Inz seemed far less supportive of Reading Horizons, with Tracine Asberry most explicitly decrying not only the company’s performance, but also MPS’s decision to partner with them in the first place. Student board member Noah Branch also spoke out against Reading Horizons, saying he found it “breathtaking that we are not cutting the contract right away.”