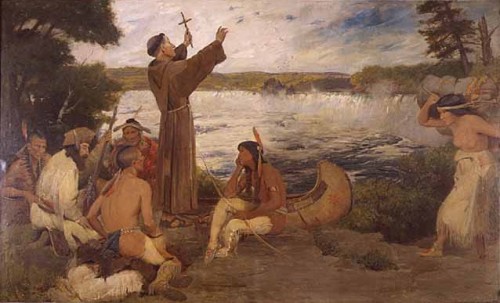 Father Hennepin at the Falls of St. Anthony – described by Scott Russell in The Circle: “The painting shows Father Hennepin at the falls, renaming it after his patron saint. The term “discovers” is wrong. Hennepin stands in a position of authority, towering over the people sitting below him, when in fact he was a Dakota prisoner at the time. At right, the painting shows a half-naked Dakota woman carrying a heavy pack. Her lack of covering is historically inaccurate and offensive, an apparent effort to show her as uncivilized.”

Last week’s blog post on offensive, racist, and historically inaccurate art in the Minnesota Capitol sparked an intense and informative discussion between Joline Gitis, who advocated keeping the art in place in order to “provide important opportunities to discuss painful chapters in Minnesota’s history–chapters that might otherwise be glossed over or ignored” and Scott Russell, who argues that the Capitol is a place where “art should inspire people, not make some feel excluded.” Both offered thoughtful, respectful arguments, in a dialogue that played out on Facebook. I found their dialogue thought-provoking and received their permission to share it here.

This is a narrow analysis of the art of the Capitol. The historic importance of these paintings comes not from the accuracy of the events they depict as historical record, but rather as integral parts of an historic public building for which they were commissioned. Are their depictions of Dakota people racist? You bet they are. Do they make people uncomfortable, even angry? They should! As a former historic site interpreter at the Capitol I received hours of training and, along with my colleagues, spent hours in further research learning the historic facts behind the scenes falsely depicted in these paintings. I gave tours to thousands of Minnesotans (most of them school children from all over the state) as well as out of town visitors. Every tour which included these paintings included serious discussion of the actual history related to the paintings and the terrible consequences of the tragic displacement of the first people to live in the land we call Minnesota. We analysed the ridiculous image of Louis Hennepin at the Falls of St. Anthony so that students and other visitors could learn how to see for themselves the flaws in the narrative presented. These images provide important opportunities to discuss painful chapters in Minnesota’s history–chapters that might otherwise be glossed over or ignored.

When Cass Gilbert designed the Capitol, the art, furnishings, fixtures and decor were considered as much a part of the building as the white marble on the exterior. He commissioned some of the most well-respected artists and muralists of his day. They were artists, not historians. Their work was often symbolic or allegorical and thus open to on-going interpretation. Removing the art does not remove the crimes and injustices of history. Engaging that art and subjecting it to a contemporary analysis provides an opportunity to come to a deeper understanding of our historical legacy. The restored Capitol (and the new Senate Office Building which will be part of the Capitol complex) will include new public spaces for contemporary art that more accurately reflects all Minnesotans and the history of the people who have lived here.

The capitol is not an art museum. It is a place where laws are made and everyone should feel welcome. The art should inspire people, not make some feel excluded. Move the art to a museum where we can have the important discussions about its historical importance and context. I have taken the art tour of the capitol and if people in our group had not pressed the issue, the “important opportunities to discuss painful chapters in Minnesota’s history” it would not have happened. Not only did the guide not raise the issues, but he was ill prepared to engage in that conversation when we started asking questions. The painting: “The Discoverers and Civilizers Led to the Source of the Mississippi” is a mural of the forced conversion of Native peoples to Christianity. If we believe that laws are meant to protect the freedom of religion, is that really a painting we want in the Minnesota Senate? To me, it needs to go. There are more important things than Cass Gilbert’s legacy and his 1905 vision of Minnesota.

I’m sad to hear you had a poorly prepared interpreter for your tour. I hope you raised your concerns with the site manager. While the Capitol is not an art museum, it is a designated historic site because of its architectural and cultural significance. The painting you cite is one I have found particularly useful in engaging audiences, raising issues about our past and considering the nature of allegory. While I worked at the Capitol, most new legislators took tours of the building with Historical Society staff. The brutal forced conversions and other efforts to forcibly acculturate Native peoples provides a warning and cautionary tale to guard against hubris in legislation. Thank you for taking time to respond to my post. I appreciate the opportunity to have this conversation with you.

Joline, I too appreciate the conversation. I still disagree. It seems that you see the art through the eyes of an historian and academic, but do you have any empathy for how painful it is for Native people to come to the Capitol for hearings, bill signings or to meet with their legislator and see this art? I would add that I worked in the Capitol in 1975 as a high school page. I later worked at the Capitol as a regular page. I worked at the Capitol when working for the Minnesota State Planning Agency. I covered the legislature for many years as a reporter. In the hundreds of times I had been in the Capitol, no one ever pointed out this art and its story to me. Not until I went on a tour with my friends Jim Bear Jacobs and Bob Klanderud, both Native men, did I get to see this art for what it is. If the goal of this art is to have difficult conversations about our state’s history, should we add murals with 1905 scenes of how women didn’t get to vote? I understand the value of having these conversations, I do not believe the Capitol is the right venue.

I do approach the Capitol art from a different perspective, but it is not without empathy for those who see themselves and their ancestors falsely–even maliciously–portrayed. In fact, that is precisely why I feel so passionately about it. If art and history didn’t offer methods of understanding our past, ourselves and each other, it wouldn’t matter to me. It is because of the power of art to evoke empathy, even when it offends, that I believe it belongs in the Capitol. I do respect your position, though I don’t agree. And I would love to see the issue of suffrage addressed for all those who have been historically disenfranchised.

I don’t think that all the problems with some of the art in the capitol can be addressed by better interpretation. Would it work to leave the Confederate flag flying over southern statehouses and address its offensive symbolism with an interpretive plaque? Here is another example. The University of Idaho decided to cover a WPA mural of the lynching of a Native man. (The mural is in building that has gone through many transitions, most recently transferred to the Law School.) Here is the kicker. The Associate Dean of the Law School explained the decision to cover the mural. “The building historically has been a courthouse first, a legislative annex secondly, and now a center for law and justice. … All three institutions stand for the rule of law, due process, and for justice for all. And extra-judicial lynching posters are contrary to that – it’s mob rule, it’s absence of process, and certainly not justice for all. So I don’t feel that passive posters, even with the interpretive language, are appropriate to our educational and outreach mission.” The same reasoning applies to the mural in the Minnesota Senate: The Discoverers and Civilizers Led to the Source of the Mississippi. It should not be covered; it should be moved away from the legislature to a more appropriate setting where art interpretation is a primary focus. (Here is a link to the blog: https://healingmnstories.wordpress.com/2015/06/28/u-of-idaho-to-cover-mural-of-indian-lynching/

The horrific painting at the U of Idaho Law School is analogous and deeply troubling. I do not, however think the confederate flag is an apt analogy for the Capitol art. The confederate flag is purely a symbol of the institution of slavery and the state and culture that supported it. Unlike a painting or historic mural it has no larger significance or value. For me, it is like the difference between painting a swastika on the wall and Shakespeare’s play, “The Merchant of Venice.” The merchant of the title is a gross stereotype and a villain based on 16th century biases. However, a swastika is a symbol of pure hatred and mass murder while Shakespeare’s play–regardless of how offensively it portrays its title character–is a work of art full of beautiful poetry and deeper meaning. Painting a swastika on the wall is indefensible (like the confederate flag), but however inaccurate and hateful the character of the merchant is, I believe Shakespeare’s play should be read and performed, and discussed.

I agree that the art should be preserved and discussed. I do not agree that the Capitol is the right venue. Stephen Elliott, the new head of the Minnesota Historical Society, appeared on Almanac earlier this year. This is what he had to say: “I have sat in the Governor’s Reception Room and I have to say it is not comfortable to sit in that room with leaders from the Dakota community and know that there are paintings in that room that really don’t reflect respectfully on Dakota history and heritage in our state.” I imagine the Native leaders feel worse. Having a better plaque on the wall does not fix that. The art needs to be moved somewhere that is more appropriate for needed conversations. It sounds good in theory to say those conversations could happen at the Capitol, but practically it won’t happen except for a very small percentage of visitors. Lastly, people can choose to go to a museum and look at the art or not. If you want to participate in the political process, you have no choice but to go to the Capitol. For some Native people, the art is more than offensive, it is traumatizing.

I am glad Stephan Elliott is uncomfortable with those images. What those paintings say about the subjugation of Native Minnesotans is horrifying and the consequences tragic. It is his obligation as director of MNHS to honestly tell the history (inaccurately) depicted in those paintings. If he can’t deal with that, he has some work to do. Those paintings are in the Capitol because of the centrality of those events in history of the region and our peoples and in the establishment of the State. Public policy, past and future, is shaped by those events and crimes committed against Native peoples. The paintings should serve as reminders to policy makers of the imperative to redress injustices past and continuing to this day.

The traumatizing nature of those images is extremely painful and not something I can reconcile with the presence of the paintings in the Capitol. Whether they stay or go, on that I think we agree.

Thanks to both Scott and Joline for wrestling with these issues, and for sharing your thoughts in a public dialogue.

Healing Minnesota Stories has an update on how you can have input into the ongoing debate over art in the state capitol. Besides the online survey, three public input meetings are scheduled: