Deporting refugees is not the American dream 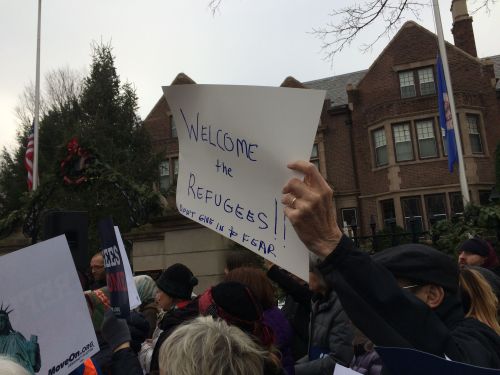 Ana Lizet Mejia’s brother was killed by gangs in Honduras, and she fled with her son to the United States. Hers was one of a wave of Central American families seeking refuge in the United States in 2014. Now she is in detention, targeted by Obama administration’s new raid-and-deport policy, which started over New Year’s weekend with initial reports of 121 mothers and children seized.

Joanna Gutierrez is Mejia’s aunt. She told the Los Angeles Times that immigration agents wouldn’t listen to her when she told them they couldn’t enter her home without a warrant. They pushed past her, waking her sleeping children as they searched the house. The children, Gutierrez said, were terrified. Mejia wasn’t there, but was captured later and taken to an undisclosed location to await deportation back to the violent, gang-ridden streets of Honduras.

The New York Times magazine, in a story that focuses on a Honduran deportee, notes that

“Over the last five years, the United States has deported more than half a million Hondurans, Guatemalans and Salvadorans, many of whom, like Villanueva, have had to leave their children behind. Although Immigration and Customs Enforcement, or ICE, says it exercises discretion to target lawbreakers for removal, a majority of Central American deportees have no criminal record. Among those who do, about half are guilty of either a traffic violation or an immigration-­related crime — entering the country illegally, for instance.”

The Central American families now being deported are not targeted for deportation because of criminal records. They are targeted just because they are here, and have been denied asylum. Many faced the immigration court without legal representation. They usually have no money for lawyers, and no right to free legal assistance. All the statistics show that people who don’t have a lawyer when they plead their case before the immigration judge are far less likely to be granted asylum, far more likely to be ordered deported.

Some of the Central Americans never even had a chance to tell their story to a judge, with or without a lawyer. More than seven thousand children never got a day in court, as the Los Angeles Times explained:

Last year, U.S. political attention focused on the tens of thousands of Central Americans seeking refuge here. The surge slowed in the second half of 2014, partly because border crossings typically drop off then and partly because of massive U.S. aid to the Mexican government to stop Central Americans before they reach the U.S. border. With violence continuing and even increasing, the number of Central American children and families reaching the United States began to increase again in late 2015. Hence the targeted raids and deportations, as Vox explains:

“Government officials consistently said last year that the best way to deter children and families from making the dangerous trip from Central America to the US was to demonstrate that people who made the trip wouldn’t be allowed to stay in the US. But this rationale only makes sense if people shouldn’t leave their home countries and try to come to the US — in other words, if they’re not really legitimate asylum seekers in fear for their lives, but people trying to take advantage of the US immigration system to come here.”

Central American families who brave the “dangerous and horrifying” journey north do so because they fear for their lives and the lives of their children if they stay at home. The U.S. government responds by denying them asylum, imprisoning them in detention camps for months on end, and targeting them for raids and deportation. That’s not the vision President Obama described in 2014:

“My fellow Americans, we are and always will be a nation of immigrants. We were strangers once, too. And whether our forebears were strangers who crossed the Atlantic, or the Pacific, or the Rio Grande, we are here only because this country welcomed them in, and taught them that to be an American is about something more than what we look like, or what our last names are, or how we worship. What makes us Americans is our shared commitment to an ideal -– that all of us are created equal, and all of us have the chance to make of our lives what we will.”

It’s time to hold him to that vision. Call or email the White House and tell President Obama to stop the raids and deportation of Central American families and children.

One response to “Deporting refugees is not the American dream”