Ear plugs in: This is what recycling looks like 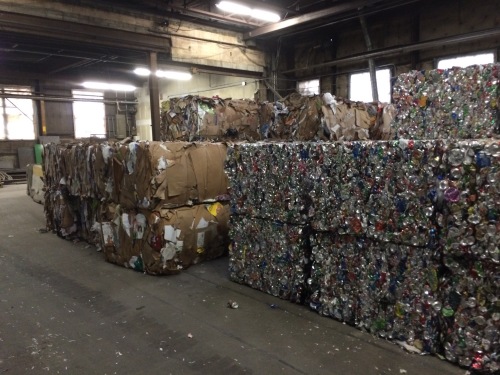 It’s noisy in here. Crashing, clashing, grinding, headache-inducing noisy — and that’s with earplugs in. Not only earplugs: for this visit to Eureka’s Materials Recycling Facility (MRF), I’m also outfitted with a safety vest, plastic goggles, and protective hard hat. Watching a big, yellow front-end loader move across the floor toward us, I’m glad that I also have an earpiece and transmitter so I can follow the directions given by my guide, Lynn Hoffman, Eureka’s chief of community engagement.

By April 1, St. Paul will decide on a contract for collecting and processing recycling. For the past 14 years, St. Paul’s recycling has been handled by the nonprofit Eureka Recycling, which is one of the bidders for the new contract. This is one of a series of posts about Eureka and recycling in St. Paul.

Most of the time, I don’t even see recycling. I put the blue bins out on Wednesday night or Thursday morning, and Eureka’s green trucks pick them up some time during the day. Today, I’m getting a look at what happens after the trucks bring our paper, cardboard, cans, glass, and plastics back to the MRF, where they are processed for eventual sale to companies that will turn them back into paper, cardboard, or more glass, plastic and cans.

Hoffman shows me various piles of material. Here’s a huge mound of material, unsorted, just as it came from the trucks. There, a pile of paper sifted out, separated from glass and metal, and a chute spitting small pieces of paper, separated on a second pass. I snap a photo of a giant bale of plastic, another of cans, both ready to ship out.

Despite the noise, workers smile, nod, wave as we come in and out of the rooms where they stand over conveyor belts, or onto the floor where front end loaders scoop up loose recyclables and transfer baled plastic from one place to another.

Eureka’s trucks collect recyclables from Saint Paul, Roseville, Lauderdale, White Bear Lake, Lakeland and Lakeland Shores. All of that come to the MRF for sorting and baling, along with loads from other haulers around the metro area. The total: about 200 tons per day, dumped, sorted, and processed into 17 different kinds of materials. These materials are then sold to manufacturers to be processed into new materials.

As a non-profit, Eureka keeps an eye on several bottom lines: generating income is important, but so are living wages, benefits and a safer environment for workers as well as the overall environmental impact of recycling.

When the city switched to single-sort recycling a couple of years ago, the MRF had to change. Consultation with workers and concern for safety led to putting the glass sorter outside the MRF building to reduce air particulates inside the building. Conveyor belts are routed through smaller rooms inside the building, which allows for better air filtration for each of the rooms.

The environmental bottom line includes choices about where to sell the bales of glass, paper, metal and plastic that the MRF produces. Many recyclers, Hoffman says, make good money sending plastics to China, where they are turned into “cheap crap we all buy.” While Eureka has to make money, too, they try to aim for the “highest and best use” when choosing buyers. That means looking for purchasers who will turn plastic bottles into bottles again, so they can remain in the recycling chain, rather than a manufacturer that would turn recycled bottles into something like plastic key chains, which cannot be recycled.

Eureka prioritizes local markets whenever possible, Hoffman explains. Not only does that cut down on emissions generated by transportation across the country or to China, but it also bolsters the local economy. An average of 92 percent of the sorted and baled recyclables from Eureka’s MRF go to Minnesota markets, with 89 percent staying in the Twin Cities. For example, 98 percent of paper goes to WestRock (formerly RockTenn) in St. Paul, where it is recycled into new paper and products such as cereal boxes.

Eureka’s commitment to Zero Waste also includes public education and promotion of Zero Waste at events such as the Walker Art Center’s Rock the Garden, New Belgium Brewery’s Tour de Fat, and the Minnesota State Fair. That commitment includes a strong push for the city to extend the recycling program to include curbside composting. While curbside composting — and Eureka’s current recycling program — are widely supported by St. Paul residents, the non-profit’s advocacy has caused friction with City Hall.