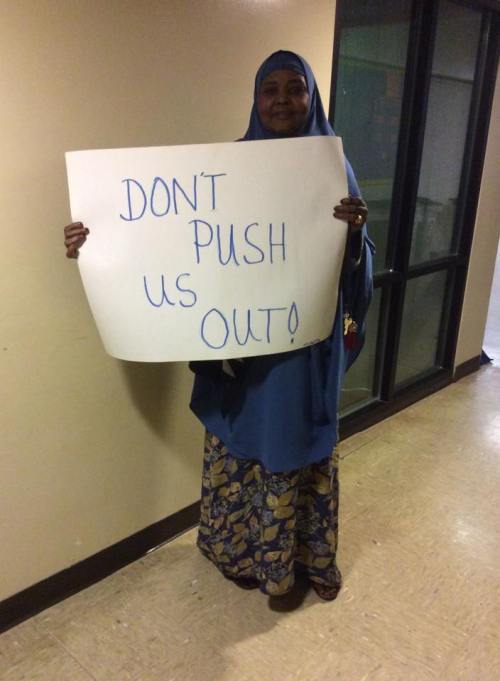 On this cold Minnesota night, about 25 Glendale Public Housing residents gather at Luxton Park for a Defend Glendale meeting. Discussion shifts back and forth, English to Somali, with translations and side conversations swirling about the room.

This room is warm, but residents are vehement about the lack of heat in their homes. One woman stands, gestures. “I wear this sweater at night, I swear to you, and two more blankets, it is so cold.”

After the meeting, a trio of Oromo residents tells me their homes are cold, too. “The windows, ice inside the room. Cold comes under the doors.”

That’s not the only complaint. Soka’s house has lots of mice. Her children are afraid to come into the kitchen because of the mice. A long time ago, the housing complex used to send exterminators. Now? “They don’t even give me a trap.” Biftu nods, and says she has the same problem.

The biggest problem, the one that led to Defend Glendale and all the meetings, is the threat that MPHA will privatize Glendale, selling it off to a developer rather than making needed repairs. According to Soka, they “say you have to move, but don’t tell us where we are going.” MPHA is pushing them out, she says, and offering Section 8 vouchers, but everyone knows those are no good. During the meeting, several people exchanged stories of relatives unable to find a landlord willing take a Section 8 voucher.

Her plea: “From federal to city hall –  Who can help us? We need help. Please help us!”

Bisharo adds her voice to the complaints about heat, and adds that the parking lot needs attention — it isn’t shoveled, and there’s not enough room to park. She agrees with the resistance to MPHA plans. “We don’t need new buildings, we need the fixing. Fix it! We don’t want to move.”

Sudo is buying a home. After 10 years in Glendale public housing, she has built up her credit rating and searched for a house and she’s going to do it. Her whole family will move into the house, nearer her work as a janitor at Harding High School in North Minneapolis. “I’m proud of myself,” she says, smiling. But tonight she wants to talk about Glendale.

“We really need people to support us as human beings,” she tells me. “We should care about each other.” She introduces Said. They both reiterate the complaints about heat. The thermostat says 72 but the heat does not come on.

Sudo is concerned about Glendale, even though she will soon be leaving. “We have to care for each other, respect and love each other as a human being,” she explains. “I love every human being. God made them beautiful. I feel this in my heart. … It’s black, it’s Chinese, it’s Mexican …” She waves off differences. “Look them deeply. They are beautiful, the way God made them.”

One response to “Listening to Glendale voices”