“Don’t ever say thank you:” Lessons from privatization 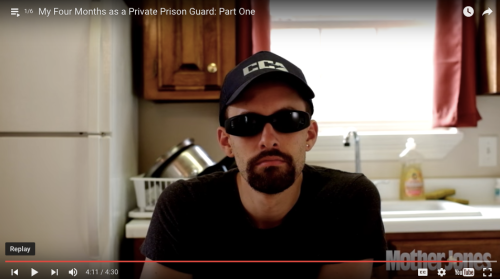 Privatization means profits over people, every single time. Shane Bauer worked four months in a private prison, going undercover as a prison guard to report on what actually happens there. “Don’t ever say thank you” was one of the early lessons he learned, and perhaps one of the least damaging.

Getting into the prison proved surprisingly easy. While a background check or even social media should have revealed his past and his employment as a journalist, the Corrections Corporation of America didn’t seem to care:

“‘People say a lot of negative things about CCA,’ the head of training, Miss Blanchard, tells us. ‘That we’ll hire anybody. That we are scraping the bottom of the barrel. Which is not really true, but if you come here and you breathing and you got a valid driver’s license and you willing to work, then we’re willing to hire you.’ She warns us repeatedly, however, that to become corrections officers, we’ll need to pass a test at the end of our four weeks of training. We will need to know the name of the CEO, the names of the company’s founders, and their reason for establishing the first private prison more than 30 years ago. (Correct answer: ‘to alleviate the overcrowding in the world market.’)”

Once inside the Winn Correctional Center in Winnfield, Louisiana, Bauer went through training and then began work. Besides observations of frequent violence, often-ineffective discipline, failure of medical services, and generalized disrespect in all directions, Bauer reports that cost-cutting implemented to boost profits has made prisons worse and worse:

“Prisoners and officers alike talk nostalgically about the time when the men spent their days working outside, coming back to their dorms drained of restless energy and aggression. CCA’s contract requires that Winn inmates are assigned to ‘productive full time activity’ five days a week, but few are. The work program was dropped around the same time that guards were taken out of the towers. Many vocational programs at Winn have been axed. The hobby shops have become storage units; access to the law library is limited. The big recreation yard sits empty most of the time: There aren’t enough guards to watch over it.

“From 9 a.m. to 5 p.m. on weekdays, every unit should have two case managers, who manage rehabilitation and reentry programs, two corrections counselors, who are in charge of resolving inmates’ daily issues, and a unit manager, who supervises everything. Not once do I see all these positions filled in a unit.”

That’s the regular prison population. Then there’s the segregation unit:

“Cypress can hold up to 200 inmates; most of the eight-by-eight-foot cells have two prisoners in them. The cells look like tombs; men lie in their bunks, wrapped in blankets, staring at the walls. Many are lit only by the light from the hallway. In one, an inmate is washing his clothes in his toilet.”

During the course of his four months undercover, Bauer discovered that the prison damaged and warped not only prisoners, but also the people who worked there, himself included:

“My priorities change. Striving to treat everyone as human takes too much energy. More and more, I focus on proving I won’t back down. I am vigilant; I come to work ready for people to catcall me or run up on me and threaten to punch me in the face. I show neither fear nor compunction. …

“I walk away, unyielding. In the back of my mind, however, there is a voice: Did you see him say anything? Wasn’t your back turned? Are you sure what you heard? It doesn’t matter, really. He wanted to intimidate me and it was about time I threw someone in the hole. They need to know I am not weak.”

After reading Shane Bauer’s riveting account, turn to Talking Points Memo for an explanation of how privatization of public services began and how it has spread. This is the first of a four-part series focusing on privatization. Part Two looks at the cost of the private prison industry — which includes not only the prisons themselves, but also privatization of prison telephone service, prison commissaries, prison medical care, post-prison parole services, ankle monitors, drug testing, and much more. With privatization comes cost-shifting so that prisoners and ex-prisoners must pay the cost of, for example, their own drug tests or parole supervision.

Nor are prisons the only public service now being privately run for profit. Private fire departments and ambulance services can (figuratively) cost an arm and a leg, and have actually cost lives and homes. The New York Times report, When You Dial 911 and Wall Street Answers gives an extensive description and analysis of the problems of privatization of emergency services across the country:

“While private equity firms have always invested in a diverse array of companies, including hospitals and nursing homes, their movement into emergency services raises broader questions about the administering of public services. Cities and towns are required to offer citizens a free education, and they generally provide a police force, but almost everything else is fair game for privatization.

“Privatization – contracting government out to private corporations – is there in force everywhere government touches the lives of citizens, ranging from war-fighting, incarceration and policing to schools, the management of urban water supplies to roads and bridges and much more.”

Privatization means private profit. It does not save taxpayer money, but shifts the burden to those least able to pay and least powerful in their protest. Stopping profiteering and privatization of public services requires vigilance in state legislatures and in Congress. Each one of us needs educate ourselves about privatization and stop the movement that, as Josh Marshall writes, is “taking key public policy decisions away from democratically elected or accountable authorities and handing them over to private corporations, whose methods and practices are either hidden from public view or are actually trade secrets they own.”

We cannot afford to look the other way.