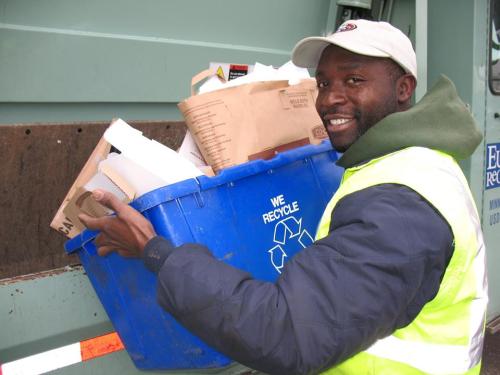 Eureka Recycling will continue as St. Paul’s recycling provider, the city announced June 24. That’s a big win for all of us in the city, as well as for the non-profit Eureka Recycling. After a lengthy contract process, the city rejected bids by the nation’s two biggest trash-and-recycling companies. So what comes next?

The contract term begins in January. According to the city’s press release:

“Changes include city-owned, wheeled and lidded carts that will be delivered to residents’ homes; alley collection where feasible; the collection of additional materials; and new geo location technology to track participation and tonnage. The City anticipates these changes will result in a 35% increase in tons collected and a 15% increase in participation.”

Eureka will have to buy new trucks to pick up the new carts. That’s one change, but the non-profit’s commitment to full-time, living-wage jobs; reinvesting profits into programming, education and advocacy; and focusing on local markets for recyclables remains strong. The city press release noted the particular strength of Eureka’s “ability to provide diverse and local markets for recyclable materials and the inclusion of additional materials.”

What’s not there yet

1) Organics recycling is the first obvious omission from the contract. That wasn’t included in the city’s RFP, and the city has previously said it will consider organics recycling separately. With strong public support, and with the example of Minneapolis right next door, it’s time to move ahead on this front. According to the city’s website, organics recycling “is expected to be part of the program beginning mid-year 2017.” Asking Eureka to add organics recycling to its regular recycling schedule would seem to be an efficient way to move forward.

2) The city still needs to award a contract for large apartment buildings, and the press release said that announcement is expected within two weeks.

3) Organized garbage collection is not part of the recycling effort, but it’s part of the entire waste picture.  The city website explains:

“In its most simple terms, organized trash collection is a system for collecting trash in which one or multiple trash haulers are authorized to collect trash from a specific service area.  In an organized system, one trash hauler would pick up the trash from your block on a set day for a set price that has been negotiated by the city.”

As the city contemplates (finally) moving ahead on organized garbage collection, the benefits include one garbage truck down the alley each week instead of seven, and probably lower costs for collection.