Catching up on news between elephant fights 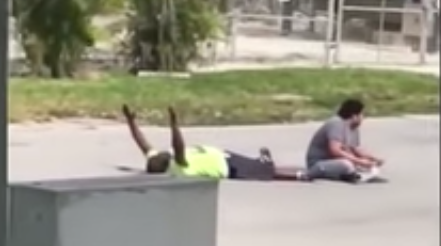 When two elephants fight, the grass gets trampled, says a Swahili proverb, which puts me in mind of the RNC and DNC domination of July news. Despite the elephants, other news is happening to people who, like grass under elephants’ feet, seem barely noticed. If you, like me, feel closer to the grass underfoot than to the elephants in Cleveland and Philadelphia, here’s a quick round-up of some important news items you may have missed.

In Florida, a police officer shot an unarmed man lying on the ground with his hands up. The man was a behavior therapist trying to coax his client, a man with autism, back into the nearby group home. The autistic man was holding a toy truck. The police excuse for shooting the behavior therapist? He was aiming for the 25-year-old autistic man. That didn’t really explain why he handcuffed the therapist after shooting him.

Almost half of the country’s two million child care workers earn so little that they need food stamps, Medicaid or other welfare. On average, they make $9.77 per hour, three dollars less than janitors, which contributes to a 30 percent annual turnover. In case you were wondering: almost all of these childcare workers are women. According to recent UC-Berkeley research:

“Low wages and inconsistent expectations pose risks to the well-being and effectiveness of early educators and undermine our nation’s ability to ensure equitable and high-quality services for all young children. Yet our description of early educator earnings across the country demonstrates that low wages and economic insecurity, the absence of a rational wage structure, and the low value accorded to educational attainment continue to persist in the early childhood field, decades after the first calls to remedy these conditions.”

Screening Syrian (and other) refugees

Just in time, as the Republican presidential campaign intensifies attacks on immigrants and refugees, the White House released an infographic explaining the screening process — which typically takes years. “Refugees undergo more rigorous screening than anyone else we allow into the United States,” says the explanation.

Overall, the United States does not let in many refugees. Nor do other wealthy countries. Oxfam scolded this week that:

“The six wealthiest countries – which make up more than half the global economy – host less than nine percent of the world’s refugees while poorer countries and territories are shouldering most of the responsibility.”

Meanwhile, U.S. immigration courts have a record backlog of more than half a million cases, which does terrible things to both immigrants and the judges and others staffing the system.

“About two-thirds of Minnesota watersheds have been tested and 40 percent of Minnesota rivers and lakes have been found to be impaired by farm runoff, bacteria, mercury or other pollutants.”

But there’s good news from the WNBA

After the Philando Castile shooting, the Minnesota Lynx, our championship WNBA team, wore black warm-up shirts with the names of Philando Castile and Alton Sterling, along with a Dallas police badge and the words “Black Lives Matter” and “Change starts with us.” That prompted Minneapolis police, working off-duty to provide security, to walk out, though they have since returned. Other WNBA teams —  the New York Liberty, Indiana Fever and Phoenix Mercury — also donned black warm-up shirts, and the WNBA fined both these three teams and their players.

But now the WNBA has seen the light, and rescinded the fines. According to the AP report:

“New York Liberty President Isiah Thomas said. ‘We are also very proud of our players the world is seeing what we already knew. They’re truly incredible, thoughtful and talented individuals. Our league, our partners and our society are better because of our players’ willingness to enter the political and social activism arena.'”