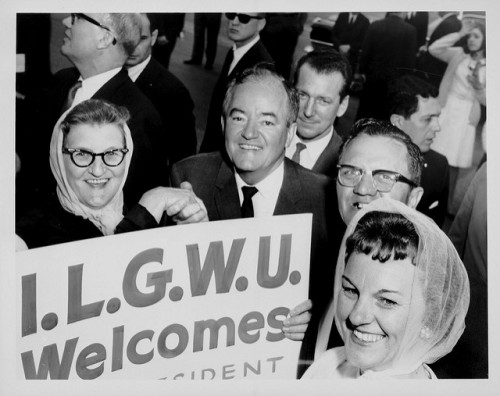 Collection: International Ladies Garment Workers Union Photographs (1885-1985) Repository: The Kheel Center for Labor-Management Documentation and Archives in the ILR School at Cornell University is the Catherwood Library unit that collects, preserves, and makes accessible special collections documenting the history of the workplace and labor relations. http://www.ilr.cornell.edu/library/kheel

In 1948, after 16 years of Democratic presidency, the Republicans controlled both houses of Congress, and the prospects for a Democrat to win the presidential election did not look good. The Democratic convention divided over civil rights: a minority report urged the Democrats to adopt a pro-civil rights platform, but neither President Harry Truman nor the strong white southern wing of the party wanted anything more than the vague generalities of previous platforms. President Harry Truman had already sent a strong civil rights message to Congress in February 1948, but with Republicans controlling Congress, civil rights legislation had no chance of passage.

This week, with another national political convention in full swing, I am taking time to reflect on some inspiring moments from three conventions of the past: 1948, 1964 and 1968.

Then, on July 14, Minneapolis Mayor Hubert Humphrey got up to speak at the Democratic National Convention. He invoked great Democratic names from Thomas Jefferson to Franklin Delano Roosevelt, as advocates of the “immortal American doctrine of individual rights, under just and fairly administered laws.” His entire speech is here, including this powerful paragraph:

“My friends, to those who say that we are rushing this issue of civil rights, I say to them we are 172 years late. To those who say that this civil-rights program is an infringement on states’ rights, I say this: The time has arrived in America for the Democratic Party to get out of the shadow of states’ rights and to walk forthrightly into the bright sunshine of human rights. People — human beings — this is the issue of the 20th century. People of all kinds — all sorts of people — and these people are looking to America for leadership, and they’re looking to America for precept and example.”

The vote was close, but the civil rights advocates in the Democratic party of 1948 won. The four planks — abolition of state poll taxes in federal elections, an anti-lynching law, desegregation of the armed forces, and a permanent fair employment practices commission — were narrowly approved as part of the 1948 platform. After the convention, President Truman issued an executive order desegregating the armed forces.

Southern delegates and voters abandoned the party in droves. The Mississippi delegation and part of the Alabama delegation walked out of the convention. The Dixiecrats were born, running South Carolina Senator Strom Thurmond as a States Rights candidate for president, and winning four states in the November election. Despite the southern defections, Truman squeaked out a narrow win.

Yes, I know that neither Jefferson nor FDR nor Truman nor Humphrey himself has a spotless record on civil rights. But the point to remember here is that Humphrey stood and tried to deliver. Bill Bigelow quoted Howard Zinn as saying:

“If we remember those times and places—and there are so many—where people have behaved magnificently, this gives us the energy to act, and at least the possibility of sending this spinning top of a world in a different direction.”

Amid the vitriol and bitterness of this presidential campaign season, I need those memories and that hope.